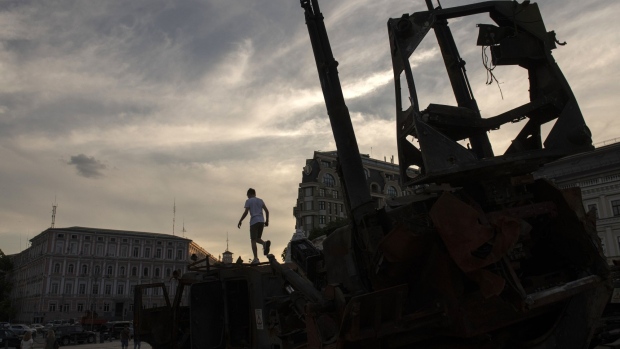 A child climbs on top of a piece of destroyed Russian military equipment displayed at St. Michael's Square in Kyiv, Ukraine, on Monday, June 27, 2022. The North Atlantic Treaty Organization (NATO) announced a plan to boost the size of its high-readiness force to 300,000 as it implements a fundamental shift in its deterrence plans after Russia's invasion of Ukraine. , Bloomberg

(Bloomberg) -- Ukraine condemned a report from Amnesty International that accused Kyiv’s forces of endangering civilians by operating in residential areas as they fight to repel Russia’s invasion.

Ukraine’s military has taken some positions and operated weapons in areas inhabited by civilians, including hospitals and schools, Amnesty said in a statement, citing witness interviews. Such tactics turn civilians into targets of Russian strikes, even if it doesn’t justify indiscriminate Russian attacks, Amnesty said.

The report “unfortunately tries to amnesty the terrorist state and shift the responsibility from the aggressor to the victim,” Ukrainian President Volodymyr Zelenskiy said late Thursday in a statement.

Ukraine and its Western allies have accused Russian President Vladimir Putin’s troops of committing war crimes including rapes and executions in territories that they occupy, as well as intentionally targeting schools, hospitals and other civilian sites with attacks.

Tens of thousands of Ukrainians have been killed, with many more forcibly deported to Russia. Millions of people have also been displaced within Ukraine, and millions more have fled to the safety of the European Union.

“Being in a defensive position does not exempt the Ukrainian military from respecting international humanitarian law,” Amnesty International Secretary General Agnes Callamard said in the report.

The US and UK ambassadors to Ukraine underscored that Russia was at fault for launching the war and endangering civilians.

Russia’s embassy in Britain argued that the report validated its findings. Russia has repeatedly said that attacks that have killed civilians -- including against sites such as theaters and schools marked with signs saying “CHILDREN” -- are aimed at legitimate military targets, which Ukraine rejects.

It’s not the first time Amnesty has drawn criticism in the region. Last year it revoked “prisoner of conscience” status of the jailed Russian government critic Alexei Navalny due to his more than a decade-old statements which the organizations saw as “discriminatory.” Facing a backlash from Navalny supporters, the organization later backtracked.