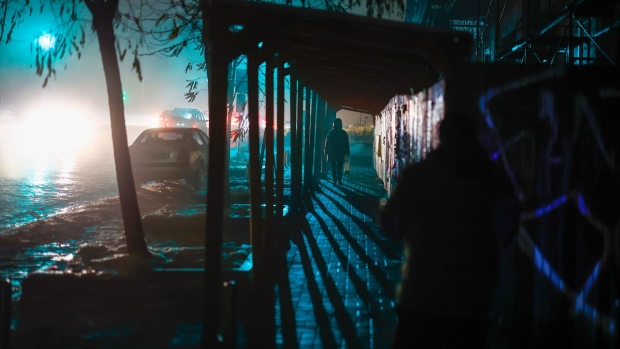 (Bloomberg) -- The US and European Union announced new donations of equipment to help keep the power on in Ukraine as millions of residents cope with outages to electricity and heating. Ukraine may soon be able to provide power to most users for stretches of as long as 16 to 18 hours from systems that have weathered weeks of Russian missile and drone attacks.

But EU diplomats delayed until Monday further efforts to agree on a price cap for Russian oil exports -- a ceiling that almost certainly will be above where the nation’s flagship grade is currently trading.

Russian President Vladimir Putin met with a handpicked group of women whose sons are fighting in Ukraine in the now nine-month-old conflict.

Seven people died and 21 were injured in Russian shelling of the recently liberated southern city of Kherson on Thursday evening, regional Governor Yaroslav Yanushevych said on Telegram. The barrage of missiles and “massive artillery fire” continued Friday in an escalation of attacks. Russian forces also struck Zaporizhzhia’s suburbs, according to local authorities. Over the past day Ukrainian troops repelled assaults near 11 settlements in the Donetsk and Luhansk regions in the east, Ukraine’s General Staff reported in a regular update. Russian forces hit the down of Kramatorsk in the Donetsk region and several settlements in Kharkiv region Friday afternoon, according to local authorities. Several residences and a hospital were destroyed.

Ukraine’s President Volodymyr Zelenskiy said in his nightly address that he agreed in a conversation with European Commission President Ursula von der Leyen on an additional 500 million euros ($520 million) in EU aid for the remaining weeks of this year.

He said they also discussed a support package for 2023 as well as more steps to support his country’s energy sector as it’s under attack by Russia. He said the biggest energy problems at the moment are in the capital Kyiv and the surrounding region as well as in the areas of Odesa, Lviv, Vinnytsya and Dnipropetrovsk.

“Please, in all regions it is necessary to sparingly spend electricity,” he told his countrymen.

Hungarian President Katalin Novak is on her way to visit Zelenskiy in the highest-level meeting between the two nations since Russia’s invasion in February, the Index news website reported.

Novak, who has a largely ceremonial role, is flying to Poland and then taking a train to Ukraine, Index reported on Friday, without citing anyone. The Hungarian president’s office would neither confirm nor deny the visit, the website said.

Zelenskiy has lashed out at Hungarian Prime Minister Viktor Orban for his lukewarm support of Ukraine and his backing of some of Russia’s agenda. This week, however, Orban’s government dialed back its opposition to joint EU aid for Ukraine and approved a decree that earmarks Hungary’s share of the assistance for its eastern neighbor.

European Union diplomats won’t meet on Friday or over the weekend to discuss the oil-price cap as divisions within the bloc remain entrenched, according to people familiar with the matter.

The bloc has been locked in a fight over how strict the Group of Seven-led price cap should be. Countries like Poland objected to the EU executive arm’s proposal to set a $65 per barrel limit, saying it was too generous to Russia. Other nations, including Greece, don’t want to go below that level.

“If you put the price cap too high, it doesn’t really bite,” European Commission Vice President Valdis Dombrovskis said in an interview on Bloomberg TV. “Oil is the biggest source of revenue for Russian budget, so it’s very important get this right so it really has an impact on Russia’s ability to finance this war.”

Ukraine continues to suffer widespread blackouts after more than a month of Russian missile attacks on critical civilian infrastructure.

Zelenskiy tweeted his response to the call.

For the first time in Russia’s now nine-month old invasion, President Vladimir Putin met with the mothers of soldiers fighting in Ukraine.

The gathering with the handpicked group of women was held at Putin’s official residence on the outskirts of Moscow on the eve of Russia’s Mother’s Day.

“We share this pain with you, and of course we will do everything we can to make sure you do not feel forgotten,” Putin said in video footage released by state news agencies. He told the women that Russia “must achieve” and “will achieve”its goals in Ukraine.

As many as 400,000 customers in each region are cut off from power at least part of the day, Ukrainian Prime Minister Denys Shmyhal said at a cabinet meeting. The Khmelnytskiy, Odesa and Ternopil regions are seeing some of the worst outages because of severe weather, while Kharkiv and Kherson are under regular shelling from Russian forces, he said.

“High-voltage infrastructure is working, but there are problems with distribution networks all over the country,” he said. Ukraine’s energy grid has been under persistent Russian missile and drone attacks for over a month.

Ukraine will receive another $500 million loan from the International Bank for Reconstruction and Development, Shmyhal said, part of a larger project to sustain public services. Funds will go to support the poor, the internally displaced, and for salaries of teachers and doctors, he said.

US Steps Up Blanket Donations for Warming Centers (3 p.m.)

The US has donated 22,500 blankets for warming centers run by Ukrainian railways as millions of people continue to have only sporadic access to power and heat, US Ambassador Bridget Brink said on Twitter.

“Our 24/7 work to help Ukraine survive the cold this winter in every way possible is very important due to Russia’s brutal attacks on civilians,” Brink said.

Ukraine’s SBU intelligence service searched the territory of the Chernivtsi-Bukovyna eparchy in the nation’s southwest, controlled by the Moscow Patriarchate, the agency said on its website.

“Law enforcement officers found warehouses with pro-Kremlin literature that praise the aggressor country and call to support the occupiers, as well as confirmation that eparchy leaders have Russian citizenship,” the SBU said.

The raid followed a similar move at Kyiv’s Pechersk Lavra, or Monastery of the Caves, and several others in the Rivne region this week as part of an effort to prevent the sites being used for sabotage by agents of the Kremlin.

Ukraine may soon be able to provide power to most users for stretches of 16 to 18 hours as systems are repaired following the latest Russian missile attacks, Oleksandr Kharchenko, director at the Kyiv-based Energy Industry Research Center, said during an online briefing.

Automated protection systems functioned well during the blackouts, protecting the grid from greater damage, and most generating facilities can soon be restarted, Kharchenko said.

Still, a full recovery from the repeating bombing could take years, he said.

The extraordinary meeting comes as Russian missile attacks have pounded Ukraine’s critical infrastructure, cutting millions of people off from electricity, heating and water. German Foreign Minister Annalena Baerbock has recently warned that the bombings could result in “hundreds or thousands of deaths” this winter.

France is sending 100 high-powered generators to Ukraine, its minster for Europe and Foreign Affairs said. The Czech Republic also pledged a new aid package to include 626 heaters, 18 power generators and medical equipment in the amount of 22 million koruna ($939,000), according to Zdenek Hrib, mayor of Prague.

The German Technische Hilfswerk agency, a government body staffed mostly by volunteers, plans to send 150 generators to Ukraine in coming weeks, according to agency’s website statement, ranging from small portable units to those that can be used to power a hospital or sewage treatment plant.

US Ambassador Bridget Brink was present for the handover of 50 generators to Ukraine, the US embassy said on its Facebook page. USAID has delivered “more than 1,000 power generators to help hospitals, schools, emergency services, government agencies, and other public service providers continue working amid the war.”

NATO allies have to learn from the way Russia has used allies’ reliance on Russian gas and avoid similar dependencies with other authoritarian regimes like China’s, alliance chief Jens Stoltenberg told reporters.

Foreign ministers for the military alliance will discuss China and NATO’s dependencies on the country for rare earth minerals, supply chains and other potential vulnerabilities, when they gather in Bucharest next week. China isn’t an adversary, but is rapidly modernizing its military and working more closely with Russia, the NATO secretary general said.

Allies meeting in Bucharest are expected to step up non-lethal support for Ukraine, such as with fuel, medical supplies and drone jammers, Stoltenberg said, adding NATO will also help Ukraine’s military transition to NATO standards.