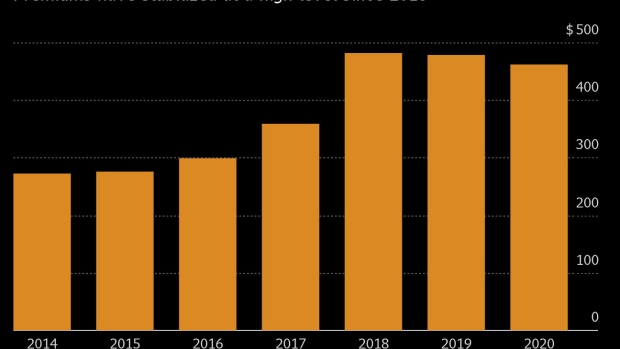 A medical doctor examines a patient with a stethoscope at a CCI Health and Wellness Services health center in Gaithersburg, Maryland, U.S., on Tuesday, April 18, 2017. After the failure of Republicans first attempt to repeal and replace the Affordable Care Act and President Donald Trumps subsequent threats to let the program explode, more health insurers are threatening to pull out of the Obamacare health-care program next year, while others may sharply raise the premiums they charge. , Bloomberg

(Bloomberg) -- As Donald Trump seeks a second term as U.S. president, his promise to abolish Obamacare and replace it with something better remains unfulfilled. Instead, his actions have boosted the program’s costs for many and the number of uninsured Americans has grown.

In 2017, 28 million Americans were uninsured. In 2019, that number hit 29.6 million, according to data from the annual American Community Survey released today by the Census Bureau. At the same time, another bureau report found a decline in the number of uninsured for the year as a whole, suggesting many Americans may be bouncing on and off coverage as their economic status changes.

President Trump has largely responded to attacks on his health record by saying his policies offer the same protections as the Affordable Care Act signed into law by Barack Obama. But they don’t, even as he has undercut the act’s effectiveness.

“There’s a certain sort of a ‘death by a thousand cuts’ aspect to this agenda,” said Aviva Aron-Dine, vice president for health policy at the Center on Budget and Policy Priorities.

Trump’s response to Covid-19 may be a more salient issue for voters this fall. The U.S. has recorded more coronavirus cases and deaths than any other country. But to the extent that traditional, pre-Covid policy issues influence voters, and as joblessness rises in the pandemic, health care still ranks high.

The drive to repeal Obamacare consumed much of Trump’s first six months in office, starting with an executive order on inauguration day aimed at “minimizing the economic burden” of the law.

But even though Republicans controlled both houses of Congress, they never coalesced around a viable alternative. The effort failed after three Republican senators, including the late John McCain, broke with the party in a late-night vote.

Premiums in ACA markets were already rising at the end of Barack Obama’s presidential term. Rather than attempt to repair the law, Trump pledged to let the ACA fail. In its first year, the Trump administration cut funding for outreach to help people enroll and eliminated subsidies for insurers to lower out-of-pocket costs.

The result: By that fall, the ACA’s markets had become increasingly costly for middle-class families whose incomes made them ineligible for federal subsidies that kick in below $105,000 for a family of four.

Trump also promoted new policies to let people buy less expensive, skimpier plans that don’t meet ACA standards, including its protection for people with pre-existing conditions. And the Republican tax bill passed at the end of 2017 repealed the ACA’s penalty for people who go without coverage.

Insurers are expanding their footprints in the plan this year, as people who lost jobs during the pandemic are expected to turn to the marketplaces. And in several states where politicians resisted the ACA’s Medicaid expansion, voters have approved it by referendum.

Now, Trump rarely mentions the law in public, but his administration still pursues its demise. The Supreme Court will hear arguments in the latest legal challenge to the ACA on Nov. 10, a week after the election.

The lawsuit is widely considered a long-shot with the current composition of the Supreme Court. Five justices who have twice upheld most of the ACA remain on the bench.

A ruling against the law would “would create chaos in the health-care system and political chaos as well,” said Larry Levitt, vice president for health policy at the Kaiser Family Foundation, a nonpartisan research group.

Without the ACA, there’s no provision in federal law to keep insurers from charging sick people higher prices or excluding them from coverage.

The Trump campaign was given a series of questions on health care for this article, including:

While the ACA consumes an outsized share of political attention, most Americans get health coverage from employers or public programs like Medicare and Medicaid. Beyond the ACA, Trump has advanced a number of policies with varying degrees of success.

The Food and Drug Administration sped up approval of applications from generic drugmakers, increasing competition. But while Trump has kept drug prices toward the top of his campaign speaking points, the administration has made little progress in dropping prices for consumers.

On Sunday, just weeks before the election, Trump moved to boost his standing on the issue by signing a presidential order to cut Medicare drug costs by tying them to prices in other countries. The order instructs the Department of Health and Human Services to test “a payment model” for some drugs, a process that will take months to employ and is facing opposition from drugmakers, the U.S. Chamber of Commerce, Democrats and even some Republicans.

“The president has talked a lot about bringing down drug pries but has accomplished very little tangibly,” Levitt, of the Kaiser Family Foundation, said.

Reproductive health is “possibly the area of health-care where President Trump has had the biggest impact,” Levitt said.

In a nod to his conservative base, he cut federal funding from health-care providers that perform or refer patients for abortion services, including Planned Parenthood, and allowed employers more flexibility to avoid covering contraception.

Under Trump, states have been given more latitude to adjust Medicaid programs that cover low-income people. One policy in particular allowed states to impose work requirements on some Medicaid recipients. Several states attempted to do so, but courts have blocked the changes.

Trump’s health agencies have also advanced a suite of rules intended to make health-care prices more transparent. It’s part of a broader agenda to improve how markets for health-care services work, and give patients options in deciding what care to get.