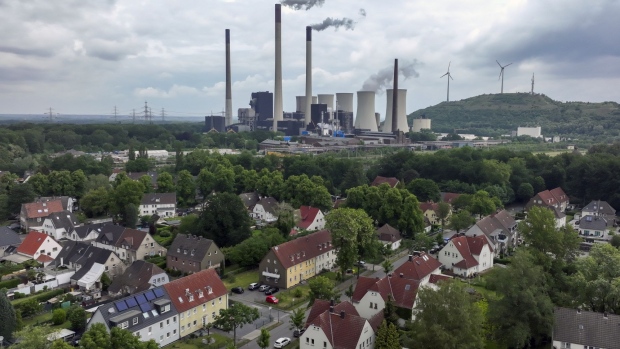 Chimneys and a cooling tower emit vapor at the Scholven coal-fired power plant, operated by Uniper SE, beyond housing in Gelsenkirchen, Germany, on Saturday, May 21, 2022. S&P Global Ratings last week downgraded Uniper to the lowest investment grade level, a move that could prompt lenders to restrict access to credit and peers to demand more collateral to back trades. , Bloomberg

(Bloomberg) -- Uniper SE reported a loss of more than 12 billion euros ($12.2 billion) for the first half of the year, ranking among the biggest in German corporate history and laying bare the unprecedented crisis engulfing Europe’s energy markets.

The size of the hit for the utility, which last month received a government bailout, shows just how severe the situation is as the European Union braces for what could be a difficult winter.

Russia has curbed gas supplies to the EU amid heightened tensions over its invasion of Ukraine, with the effect rippling across the continent, fanning inflation and threatening to push some of the continent’s largest economies into recession.

“Uniper has for months been playing a crucial role in stabilizing Germany’s gas supply -- at the cost of billions in losses resulting from the sharp drop in gas deliveries from Russia,” Chief Executive Officer Klaus-Dieter Maubach said in a statement detailing the firm’s financial results.

The losses, on an IFRS basis, include a 6.5 billion-euro hit from future gas shortages and reflect impairments of 2.7 billion euros related to a Nord Stream 2 loan and goodwills from the Global Commodities and the Russian Power Generation unit, the firm said.

Supply curtailments forced the company to buy gas in the spot market to fulfill contracts, pushing it to the edge of insolvency. That led to a multi-billion euro rescue package from the German government to prevent the company’s collapse, which could have had a domino effect on the country’s energy system.

‘Eye of the Storm’

“Uniper remains in the eye of the storm of the European energy crisis,” John Musk, an analyst at RBC Europe Ltd., said in a note, adding that the company is “one only for the very brave.”

The utility posted an adjusted loss before interest and taxes of 564 million in the first half, after earnings of 580 million in the same period last year. Its net debt jumped to 2 billion euros from 324 million euros amid negative cash flow, along with measures to improve liquidity in the gas and carbon emissions-allowance businesses.

The forecast for this year still cannot be issued “within an adequate range because of the volatile environment,” the company said, expecting a “substantial negative result.” Its previous forecast for this year was in the range of 1 billion and 1.3 billion euros. Uniper expects earnings improvement in 2023 and aims to leave the loss zone beginning in 2024.

Germany, still heavily dependent on Russian energy despite efforts to diversify, is racing to build sufficient stockpiles to avoid severe rationing when the weather turns cold.

The government has urged lower consumption, seeks to revive coal power plants and is rethinking the phaseout of its remaining nuclear power plants. This week, it also slapped a levy on gas use, leaving households bracing for higher energy bills and exacerbating the Europe-wide cost-of-living crisis.

Moscow and Berlin are in a standoff over the return of a key turbine for the Nord Stream gas pipeline, with the machine stranded in Germany after repairs in Canada. Gazprom PJSC has slashed flows via Nord Stream to just 20% of capacity, prompting the German government to repeatedly voice concerns supply could be cut off completely.

Uniper will have to deal with the full economic loss of replacing Russian gas until Sept. 30, when the government will introduce a mechanism to allow utilities to pass on 90% of costs to customers.

The government stands ready to further support the firm, if replacement cost losses that can’t be offset by operating profits from its other businesses exceed 7 billion euros, the company said in its report.

Uniper’s business with Russia has been making a loss on a daily basis since June 14, according to Maubach, who noted that the hit can sometimes surpass 100 million euros.

“There is no end in sight to this development,” he told reporters. “For globally active foreign oil and gas companies, such losses might be bearable. In Germany, on the other hand, there is not a single energy company that such a development would not bring to its knees.”