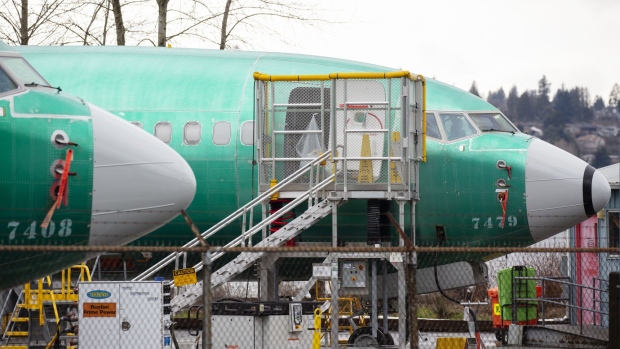 (Bloomberg) -- United Airlines Holdings Inc. is bracing for another busy summer travel season without the 737 Max after Boeing Co. provided a new schedule this week for the grounded jet’s return.

“We continue to assume there will be a safe return of the Max,” United President Scott Kirby said Wednesday. Speaking on an earnings conference call, he said the company is encouraged by the “more realistic timeline” Boeing has offered as its new chief executive seeks to reset relations with its customers and regulators.

United has removed the Max from its flight calendar until June 4. But Boeing’s latest estimate for a midyear ungrounding means that United probably won’t count on the aircraft until after the peak summer travel season, said Andrew Nocella, United’s chief commercial officer.

The Max is a critical tool for growth at United, one of the biggest buyers of the aircraft’s larger two variants. Its absence for most of 2019 drove costs higher and delayed much of United’s network plans for expansion at its hubs in Chicago and Houston, executives said.

“The Max aircraft were a key ingredient of what we’re trying to accomplish,” Nocella said. The grounding means the carrier’s hub-growth plans are “likely to be behind schedule for the foreseeable future.” In early 2018, Kirby and Chief Executive Officer Oscar Munoz called for aggressive growth to boost connecting traffic and profitability at United hubs in Chicago, Houston and Denver.

Because of the continued uncertainty, United moved up its plan to stop providing annual capacity guidance as a way of keeping the focus on “driving toward our earnings,” Kirby said.

United said it’s benefiting from robust travel demand carrying over from last year, which has helped offset the effects of higher-than-expected fuel prices and the Max’s continued grounding.

The Chicago-based carrier forecast adjusted first-quarter profit of 75 cents to $1.25 a share, compared with the 75-cent average of analyst estimates compiled by Bloomberg. Revenue for each seat flown a mile, a closely watched gauge of pricing power, will be flat to up 2%, comparable to the outlook Delta Air Lines Inc. mapped out last week.

Adjusted earnings rose to $2.67 a share in the fourth quarter, in line with the average of 17 analysts’ estimates compiled by Bloomberg. Sales climbed to $10.88 billion, also in line with estimates.

Excluding fuel, United said its cost for each seat flown a mile will rise no more than 2% in the first three months of 2020 after jumping 2.7% in the fourth quarter.

The return of the 737 Max is expected to help ease costs for the U.S. airlines that fly it, although analysts have expressed concerns that the end of the flying ban may also spur an increase in seats and thereby hurt fares.