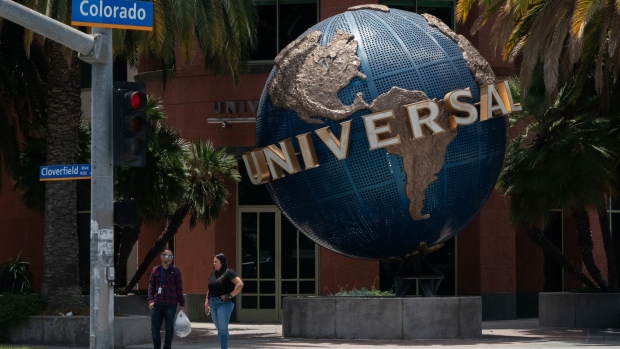 Pedestrians stand outside Universal Music Group headquarters in Santa Monica, California, U.S. on Friday. June 4, 2021. A blank-check company backed by billionaire Bill Ackman is in talks to merge with Universal Music Group, setting the stage for the Vivendi SE-owned record label to become a separate business, according to people with knowledge of the matter. , Bloomberg

(Bloomberg) -- Universal Music Group NV, which was spun off from Vivendi SA last month, said third-quarter sales grew 16%, posting growth in recording, licensing and publishing in its first report as a public company.

Universal is benefiting from growth in music subscriptions and streaming, along with higher royalties from the use of songs in broadcast and other areas. Top sellers included new releases from Billie Eilish, Drake and King & Prince, along with continued sales of BTS and Olivia Rodrigo.

Universal went public in Amsterdam last month, finishing its first day at 25.10 euros. The stock closed little changed Wednesday at 25.14 euros. Vivendi spun off 60% to its stockholders and retained a 10% stake at the time.