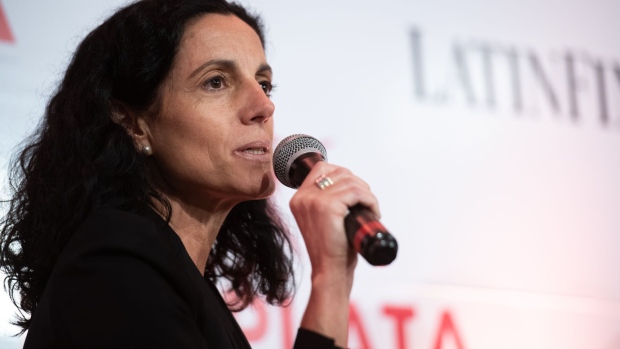 Azucena Arbeleche, Uruguay's economy and finance minister, speaks during a panel discussion at the LatinFinance/Fonplata conference in Montevideo, Uruguay, on Thursday, March 5, 2020. The panel discussed growth prospects alongside the economic agendas of Paraguay's government and the new administrations of Argentina and Uruguay. , Bloomberg

(Bloomberg) -- Uruguay will push for cheaper multilateral loans for countries that implement strong environment policies, Finance Minister Azucena Arbeleche said, as the country prepares to take over a key committee at the World Bank and the International Monetary Fund.

“This would apply not only for bonds issued in capital markets, but could include loans disbursed by multilateral agencies,” Arbeleche said in an interview at the nation’s embassy in Washington.

The move comes as green bonds and sustainability-linked bonds gain popularity among companies and governments, with issuance through last month surging to $424 billion, according to data compiled by Bloomberg.

The committee is a ministerial-level forum of the World Bank and the IMF for intergovernmental consensus-building on development issues. Arbeleche will serve as chair through October 2022.

Uruguay is working on its own green bond that would allow it to borrow money for general spending purposes rather than earmarking funds for specific environmental or social programs as has been the case for sovereign green bonds sold by other countries, she said. Arbeleche declined to comment on the timing of the issuance, which she said would be the first of its kind in the sovereign bond market.

The country might also sell its first Yen-denominated bond in a decade this year after finishing a non-deal roadshow with Japanese investors two weeks ago, said Herman Kamil, director of the Finance Ministry’s debt management unit.

“We still need to iron out the financial conditions of the potential issuance,” he said.