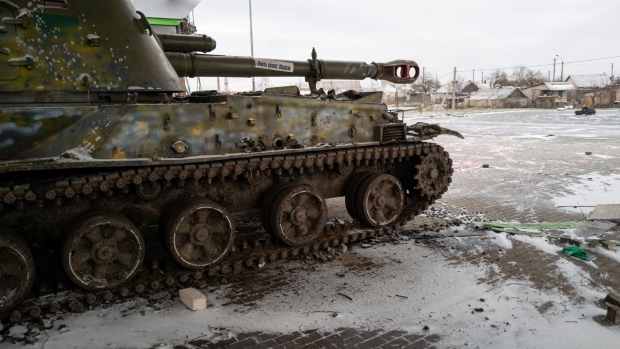 KUPIANSK, UKRAINE - JANUARY 06: A Ukrainian tank sits along a street in the town of Kupiansk which has experienced regular shelling from the Russians on January 06, 2023 in Kupiansk, Ukraine. Despite a unilateral Russian ceasefire ordered by President Vladimir Putin, shelling could be heard throughout the day. Kupiansk was occupied by Russian forces mere days after their February 24th invasion of Ukraine, a process hastened by the surrender of Kupiansk's Russia-friendly mayor. Ukrainian forces liberated the town in September, but Russia turned its artillery on Kupiansk while in retreat, destroying buildings and damaging energy and heating infrastructure. Another Russian missile strike occurred here at the end of the year. (Photo by Spencer Platt/Getty Images) , Photographer: Spencer Platt/Getty Images

(Bloomberg) -- The Biden administration is sending a $2.85 billion package of military hardware to Ukraine, supplying the sort of powerful weapons that it had previously withheld as the country looks to press a counteroffensive against Russia.

The package announced Friday includes 50 Bradley Fighting Vehicles, which the administration had said Thursday would be coming as part of a joint provision of aid with Germany. But the US also announced it was sending other gear as well, including, for the first time, the Paladin self-propelled howitzer artillery system.

The weaponry, which comes from US inventories, also includes surface-to-air missiles, armored personnel carriers and ammunition. It marks a major step forward in what the US has been willing to give Ukraine after months of resistance to President Volodymyr Zelenskiy’s demands for fear of further escalating the conflict with Russia.

The new aid also heralds a broader shift in strategy for the US and allies such as Germany, which agreed Jan. 5 to send Marder infantry vehicles, and France, which is also sending more advanced armored vehicles.

The latest US package “is well-suited to the needs the Ukrainian forces have right now,” said John Kirby, a spokesman for the National Security Council. He said the administration agreed to send Bradleys to Ukraine because it expects fighting will shift to open farmland of the Donbas region that Russia had annexed.

While the US has argued it’s given Ukraine the military aid it needs at the right time, the decision also comes a few weeks after a pre-Christmas visit to the US by Zelenskiy, who gave a speech to Congress imploring the US for more aid and framing the fight against Russia as a global battle against tyranny.

The Biden administration also faces a more challenging road ahead with some Republicans who now control the House of Representatives arguing for more scrutiny of Ukraine aid. On Friday, Representative Kevin McCarthy offered opponents of his bid to become speaker spending caps that would result in a $75 billion cut in defense funding.

Ben Hodges, former commander of US Army Europe, said the latest aid package underscored just how much allied thinking had changed from the start of the war, when US officials worried Ukrainian forces using a US-provided Stinger missile to shoot down a Russian helicopter would be seen as too escalatory.

“That’s got to be a crushing blow to the Kremlin to see that we’re all sticking together and we’re willing to take this next step,” Hodges said.

If officials withhold capabilities that would help Ukraine defeat Russia, he said, “it becomes a self-fulfilling prophecy.” He predicted the US eventually will send even more powerful hardware such as Abrams tanks.

Germany also announced it would send armored Marder vehicles, as well as a Patriot battery, doubling the number of the systems in Ukrainian hands. The Patriots are expected to help Ukraine defend against Russian missile strikes, as well as Russian attacks with Iranian-made drones.

Separately, Washington will provide $907 million in Foreign Military Financing — $225 million to Ukraine and $682 million to its neighbors. Ukraine may use the funds for its wartime requirements, to sustain equipment previously provided by the US, and to modernize its military for the future.

The funding for neighboring countries is intended “to help incentivize and backfill donations of military equipment to Ukraine,” Secretary of State Antony Blinken said in a statement.