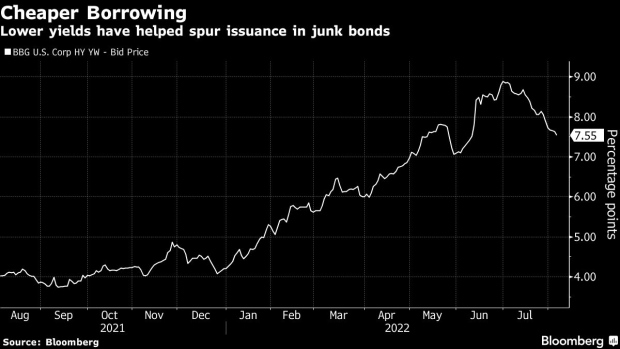 (Bloomberg) -- Blue chip and junk-rated companies are lining up to borrow again in US debt markets as recession fears wane and yields drop.

Investment-grade companies sold more than $56 billion of bonds in the US this week, the busiest week for sales since March and about double the volume that dealers had forecast late last week. Social media behemoth Meta Platforms Inc. took advantage of the relatively strong demand to sell its first ever corporate bond deal, offering $10 billion of securities.

In the US junk-bond market, two companies sold a total of $2 billion of bonds on Thursday, more than was sold in the entire month of July. Both sales, from cable company Charter Communications Inc. and wealth manager Advisor Group Holdings Inc., found strong enough demand to increase the size of the offerings.

Companies are selling after their borrowing costs have dropped over the last month. The average yield on a high-grade corporate bond was 4.33% at the end of Thursday, close to the lowest since early June. For junk bonds, that figure was 7.55%, also the lowest in weeks. Leveraged loan prices are the at highest level since mid June.

Investors are increasingly hopeful that the US will avoid recession. A report on Friday showed that the unemployment rate fell to 3.5% in July, the lowest in five decades. Equity, credit and rate markets have assigned a 40% probability to a US recession, down from 50% in June, according to a report earlier this week by JPMorgan Chase & Co.

While a strong labor market can help support consumer spending, which amounts to about two-thirds of the US economy, a healthy employment market also gives the Federal Reserve license to keep tightening rates to tame inflation. Higher rates can hurt companies by lifting their borrowing costs.

“People are very hungry to call the bottom and go back to making money again,” said Noel Hebert, Bloomberg Intelligence director of credit research. But it’s “hard to price for growth post recession when we haven’t even done a recession yet.” Hebert views the rally as short lived.

There are limits to the new issuance bonanza. Leveraged loan volume is still relatively light, with a few big deals expected for September. And dealers expect high-grade bond sales to be more like $20 billion to $25 billion next week.

But for now money is flowing back into corporate bond funds. Investors poured $1.22 billion into investment-grade funds for the period ended Aug. 3, according to Refinitiv Lipper data, ending a record streak of 18 weeks of withdrawals amounting to $74 billion. Junk bonds posted back-to-back weeks of inflows totaling about $7.8 billion.

The deadline for holders of Ukraine’s GDP warrants to vote on the sovereign’s debt-freeze proposal passes on Friday.

Chinese high-yield dollar bonds fell to the brink of March’s record low this week, highlighting the ongoing contrast with onshore notes whose spreads remain near their tightest levels in years.