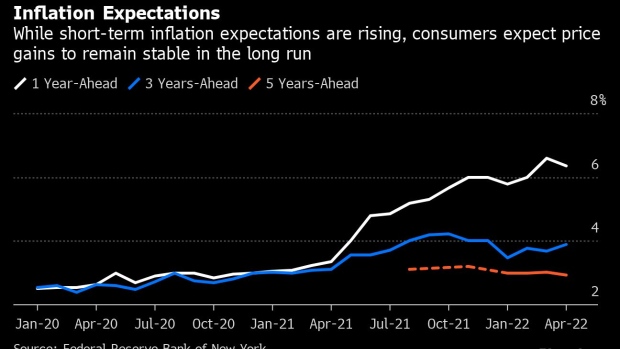 A shopper inside a grocery store in San Francisco. , Bloomberg

(Bloomberg) -- US consumers still largely expect the current inflationary shock to be temporary, and for price gains to be low and stable in the longer run, according to a report released Thursday by the Federal Reserve Bank of New York.

The survey, which confirmed earlier findings from the New York Fed, showed that while short-term inflation expectations are rising, consumers expect prices to rise by about 3% in five years. That suggests they expect the near-term surge in prices to fade over time, according to the researchers.

The Fed’s target for its preferred inflation gauge, the Commerce Department’s personal consumption expenditures price index, is 2% a year. The measure rose 6.6% for the 12 months ending March, while the Labor Department’s consumer price index rose 8.3% in April.

The paper found that people are more divided over how prices might behave in the medium term. There was an increase in both the share of respondents who expect high inflation three years from now and in the portion who expect low inflation, or even deflation.

“Somewhat surprisingly, there is a divergence in consumers’ medium-term inflation expectations,” the researchers wrote.

Fed officials are working to keep inflation expectations from becoming unanchored, a shift that could fuel further price increases and make it more difficult for them to bring the strongest inflation in decades back to their goal. Policy makers largely expect that an easing of supply constraints, combined with the adjustments they are making to monetary policy, should help keep inflation expectations grounded, according to minutes of the Fed’s May meeting released Wednesday.

The central bank lifted interest rates by a half-point earlier this month and officials signaled they are likely to make similar rate increases in June and July to temper demand and cool price growth. Officials say that the actions they take in following meetings will depend on what happens with the economy and inflation.

Atlanta Fed President Raphael Bostic, one of the most dovish policy makers, said Monday the central bank could take a pause in September if inflation comes down faster than expected over the summer. But Fed Chair Jerome Powell has set a high bar for pausing rate hikes, saying on May 17 that officials will keep pushing on policy until there is “clear and convincing” evidence that inflation is declining.