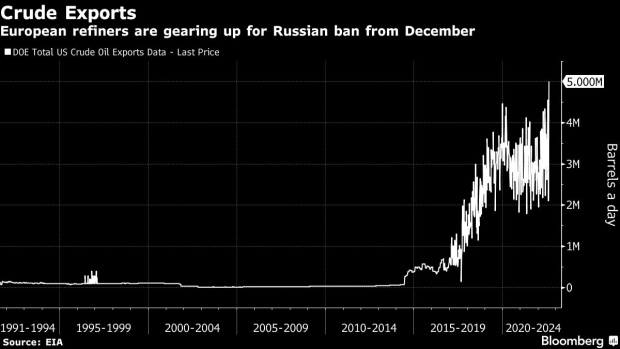 (Bloomberg) -- US crude exports rose to a record as European refiners scramble to wean themselves from Russian supply as the deadline to ban Russian imports approaches.

The rise in exports underscores just how much the world is turning to American suppliers for their energy needs. In addition to Europe’s growing reliance, global markets are also switching to oil to fuel electricity needs as natural gas prices have soared since Russia curtailed its supplies in retaliation to oil sanctions.

Adding to pressure on tight crude markets, Libyan exports fell precipitously last month, prompting European refiners to depend even more on the US for supply. About 45 million barrels of crude are expected to reach Europe in the month of August, which would be the highest since 2019 when Bloomberg started compiling data.