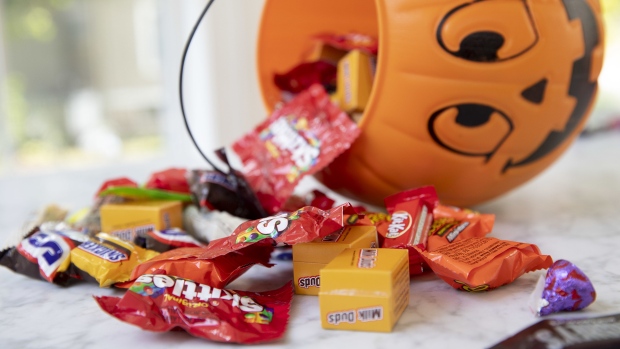 (Bloomberg) -- With the pandemic waning, the US is gearing up for pre-pandemic levels of trick-or-treating, despite inflation levels not seen for 40 years.

Undeterred by soaring prices, 69% of consumers are planning to celebrate Halloween this year compared with 68% in 2019, the National Retail Federation said Monday.

A survey commissioned by the trade group found that consumers plan to dole out an average of $100 on costumes, candy and decor, as well as other items, with total spending expected to reach a record $10.6 billion — $710 million of it spent on pets.

According to more than 8,000 people surveyed, top costumes of 2022 will be the classics: a witch and vampire for adults, Spider-Man and princess outfits for kids, and a pumpkin and hot dog for pets. But online memes remain the most popular source of inspiration.

“Social media is playing an increasingly important role in consumer behavior, and Halloween is no different,” said Phil Rist, executive vice president of strategy at Prosper Insights, which conducted NRF’s 2022 survey. “Younger consumers, particularly those under the age of 25, will look to platforms like Instagram and TikTok for costume inspiration this year.”

Deloitte previously forecasted that soaring prices would slow holiday shopping from November to December compared with last year — but nearly half of the respondents in the NRF report have already started to stock up for Halloween. Of those, 40% are turning to discount retailers, 36% to specialty stores and 31% to online outlets.