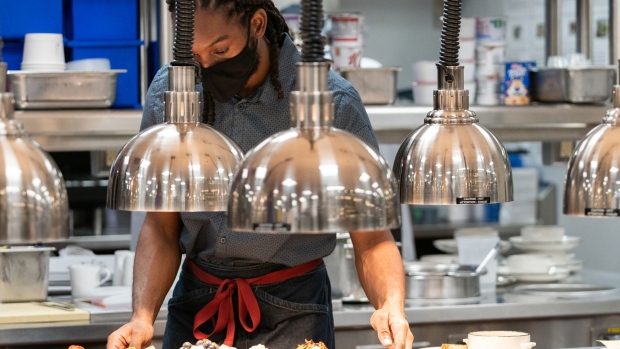 An employee works inside the kitchen at the New York Marriott Marquis in New York. , Photographer: Jeenah Moon/Bloomberg

(Bloomberg) -- US job openings dipped slightly in May, though remained near a record, indicating resilient demand for labor even as optimism about the economy’s prospects grow more uncertain.

The number of available positions decreased to 11.3 million in the month from an upwardly revised 11.7 million in April, the Labor Department’s Job Openings and Labor Turnover Survey, or JOLTS, showed Wednesday. The median forecast in a Bloomberg survey of economists called for 11 million openings.

The jobs market remains a bright spot in an otherwise darkening economic picture. While many employers are still desperate for talent, recession fears are mounting and consumers are starting to waver beneath decade-high inflation -- something that may lead employers more broadly to abandon hiring plans.

There were about 1.9 jobs for every unemployed person in May, little changed from April. Federal Reserve officials, including Chair Jerome Powell, have pointed to the figure as a measure of labor market tightness and a reason why the economy can withstand aggressive rate hikes without toppling into recession.

Some 4.3 million Americans quit their jobs in May, little changed from the prior month. The quits rate, a measure of voluntary job leavers as a share of total employment, dipped to 2.8%, a four-month low.

Layoffs in May were similar to the prior month at 1.4 million, well below pre-pandemic levels and consistent with employers’ desire to hold onto workers. Some industries showed notable pickups in layoff rates, including wholesale trade and educational services.

The data reflect a period before a wave of job-cut announcements from technology companies and those in interest-rate sensitive sectors, including housing.

The data precede Friday’s monthly jobs report, which is currently forecast to show the US added 265,000 payrolls in June. The unemployment rate is expected to hold at 3.6%, near its lowest level in decades.