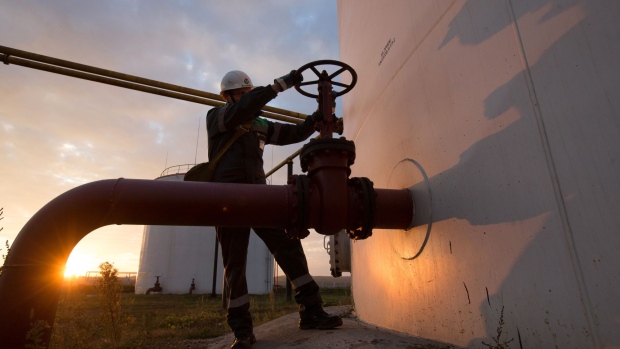 An employee turns a control valve on pipework beside a storage tank at an oil delivery point operated by Bashneft PAO in Sergeevka village, near Ufa, Russia, on Monday, Sept. 26, 2016. Bashneft distributes petroleum products and petrochemicals around the world and in Russia via filling stations. Photographer: Andrey Rudakov/Bloomberg , Bloomberg

Those who watch the issue carefully have raised the risk of “over-compliance,” in which companies not prohibited by law from working in a given area nevertheless exit entirely due to concerns about violating US policies, or for other reasons like reputation risks.

A senior Treasury official acknowledged the unprecedented nature of the price cap during a call with reporters on Friday, but said the US has tried to counter that by engaging extensively with industry players ahead of the implementation. The countries in the price cap coalition have tried to make the policy as easy as possible to follow, the official said, speaking on condition of anonymity due to the sensitive nature of the talks.

The cap on Russian oil was first proposed by the US amid the wider global response to Russia’s invasion of Ukraine. By allowing crude sold under the cap to dodge European Union sanctions restricting Russian output, it’s intended to trim Moscow’s revenue while keeping oil flowing to the market.

“One of the big potential issues is going to be over-compliance, intermediaries deciding that the risk is too great and not engaging,” said Adam M. Smith, a partner at Gibson, Dunn and Crutcher and a former adviser at Treasury’s Office of Foreign Assets Control, which oversees sanctions. “Banks have historically been very risk-averse -- as they should be -- in the sanctions space and I think over-compliance in that context can be expected.”

The Treasury official also said that while some companies have left Russia due to over-compliance with US sanctions, behavior in the energy sector has been different, mainly because the commodity is relatively fungible and key to the world economy.

It will take market participants, including shipping firms and trading houses, some time to understand the compliance issues, said Helima Croft, chief commodities strategist at RBC Capital Markets LLC, given the cap was agreed by EU and G-7 members only days before its implementation, alongside associated EU sanctions to restrict Russian oil sales.

“It’s not necessarily clear how you can have this simultaneous launch of the price cap and the sanctions on Monday,” she said. “I wonder if we might have near-term disruptions as legal departments wade through the questions of whether they can really do this trade.”

“That’s a real risk,” he said. “There could be a multi-week lull when some buyers are reluctant to move barrels as they wait and see. It’s not going to be like the whole trade shuts down, but there could be some who take a step back.”