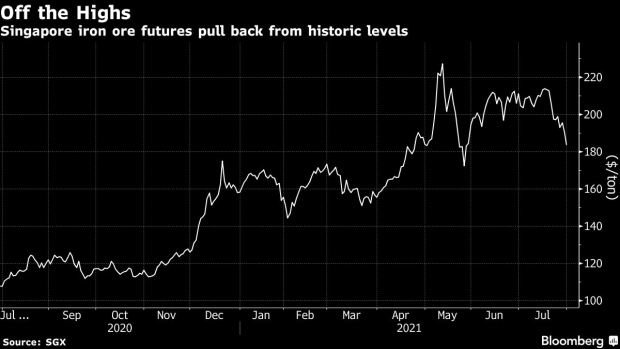 (Bloomberg) -- The world’s second-largest iron ore producer assured the market Thursday that it can still reach its annual production guidance. But it won’t be all plain sailing.

Vale SA continues to recover from a 2019 dam disaster that cost it the title of world No. 1 supplier. On a call with analysts Thursday, Chief Executive Officer Eduardo Bartolomeo said he remains confident of churning out somewhere between 315 million and 335 million metric tons this year as a return to full capacity at key mines and the restart of a tailings dam point to second-half growth.

Beneath that belief are a few areas of risk. While reiterating the output target, Vale cut its end-2021 production capacity forecast to 343 million tons from 350 million tons due to potential tailings and permitting issues at other mines.

Such risks have helped send iron ore prices to near record highs this year after demand bounced back in the pandemic recovery. Vale’s battle to recover from its Brazilian dam woes makes it a major swing factor on the supply side.

Still, the company continues to target a return to 400 million ton-capacity next year as well as building buffers of more than 50 million tons in the future. That doesn’t mean it’s going to flood the market, given the CEO’s value-over-volume mantra: “Were not going to put value on the market if we’re not rewarded for that.”