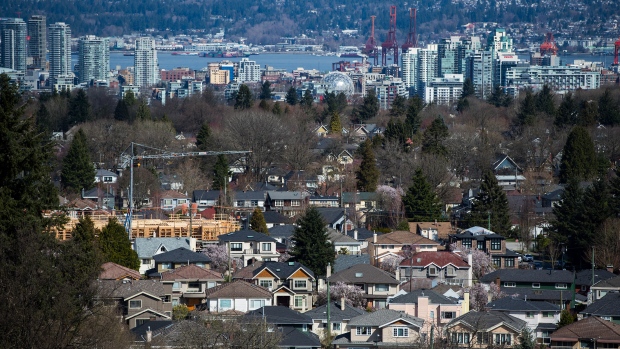 A condo building is seen under construction surrounded by houses as condo towers are seen in the distance in Vancouver, B.C., March 30, 2018. The Canadian Press/Darryl Dyck

British Columbia plans to create a single real estate regulator to better combat money-laundering in markets like Vancouver, where the government says dirty money has helped drive up housing prices.

The provincial government intends to introduce legislation late next year that would establish a joint financial-services and real estate watchdog by the spring of 2021, the Ministry of Finance said Tuesday.

The plan would bring real estate regulation — including licensing — under the purview of the B.C. Financial Services Authority, which currently regulates mortgage brokers, private pension plans and financial institutions. Having a single regulator for those areas will streamline investigations and enforcement, according to the government.

British Columbia has led Canada’s charge against spiralling home costs, introducing new taxes and policies to restrict foreign investment and speculation. In 2016, it ended self-regulation of the real estate industry after a scandal involving “shadow flipping,” where brokers earn multiple commissions by helping properties trade hands repeatedly before a deal closes, inflating prices. The province also is set to become the world’s first jurisdiction to expose hidden property owners next year when it creates a searchable, public registry of who controls the trusts and anonymous corporations that own land.

Vancouver, in particular, has come under scrutiny after the government revealed that casinos had been accepting millions of dollars in questionable cash from gamblers for years. The Pacific Coast city is one the continent’s most unaffordable housing markets after prices more than doubled in a decade.

Premier John Horgan’s government has partly blamed dirty money, issuing a government-funded report earlier this year that claimed more than $7 billion was washed through the province in a year. Questions remain about those figures, which were derived from economic modeling, not hard evidence. Horgan has launched a public inquiry to investigate the extent to which money laundering has driven up real estate in the province, and an interim report is due in November 2020.