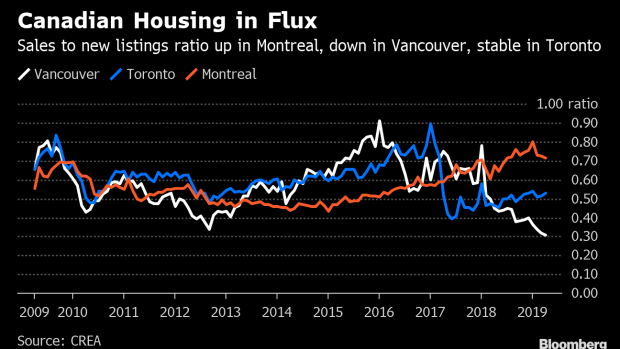 (Bloomberg) -- Vancouver’s housing market is continuing to stumble, with Montreal taking up the slack.

The sales to new-listings ratio -- a measure of how tight a particular market is -- fell to 0.31 in April in the Pacific Coast city, according to data Wednesday from the Canadian Real Estate Association. That’s down from as high as 0.78 at the beginning of 2018.

Readings below 0.4 often signal a cooling market and a drop in prices, while readings above 0.6 indicate the opposite. Vancouver’s ratio is now at the lowest since 2008. Benchmark prices dropped 8.5% in April from a year earlier.

Meanwhile, Montreal’s housing market appears to be getting tighter. The city’s sales-to-listings ratio has averaged 0.74 over the past six months. The April data show prices were up 6.3% last month on a year-over-year basis.

Rising interest rates, changes to mortgage rules and various foreign buyer regulations have slowed sales in many Canadian cities since the beginning of last year. Prices across the country have been sticky, falling just 0.3% in aggregate in the past 12 months.

To contact the reporter on this story: Erik Hertzberg in Ottawa at eschmitzhert@bloomberg.net

To contact the editors responsible for this story: Theophilos Argitis at targitis@bloomberg.net, Chris Fournier, Stephen Wicary