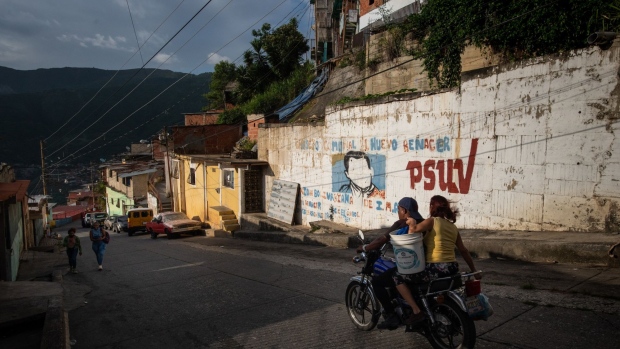 (Bloomberg) -- An image of Hugo Chavez’s eyes used to peer down on Venezuela from seemingly everywhere: the rooftops of government offices, housing developments, even the scanners at airport customs.

Today, Venezuelans are more likely to find an advertisement for makeup or jeans than a tribute to the country’s revolutionary icon.

President Nicolas Maduro's shift from socialism to a more capitalist approach, a key tenet of his bid to halt a years-long economic collapse, is showing up in many forms, from the widespread use of US dollars to the imported, gourmet foods filling store shelves. But few are as noticeable as the makeover taking place in public spaces once littered with Chavista propaganda.

Gone -- or, at least, disappearing rapidly -- are many of the formerly ubiquitous odes to “revolution,” such as the Orwellian depictions of Chavez’s eyes, slogans slapped on billboards with some version of the message “socialism or death,” or huge murals of Fidel Castro and Simon Bolivar. Most of those that remain are badly faded. Instead, city highways are crowded with billboards advertising cosmetics, food and new clothing brands.

“Political ideology has been replaced by a drive for consumption,” said Jose Carvajal, director of Ciudad Laboratorio, an urban studies think tank in Caracas. Socialist iconic billboards promoting the idea that Venezuela “belonged to everyone,’’ he said, have given way to a Dubai- or Miami-style landscape, with rows of palm trees along its main highway. In many ways, it marks something of a return to the pre-Chavez era, when multinationals hawked products of all stripes on billboards across Caracas. “Now Venezuela, like never before, belongs to a few who can succeed.”

The Information Ministry did not respond to questions about the elimination of propaganda. At least some of the changes appear to be part of a government initiative, though. Maduro, who took over after Chavez died, launched a beautification plan for 60 cities in 2020, during which posters from old electoral campaigns were taken down.

In downtown Caracas, hardcore Chavistas used to gather to watch state TV and government-aligned motorcycle gangs known as colectivos assembled. A restoration process is underway there, with historic theaters and colonial houses getting a face lift. A section of Plaza Bolivar marked by a red tent -- where debate over Socialist policies raged so fiercely that the area earned the name esquina caliente, or hot corner -- is mostly empty.

“The hot corner? It cooled down!,’’ said Ramiro Hernandez, 72, who buys gold jewelry on the street.  He sits beside the empty area, surrounded by old buildings now housing cafes and restaurants.

That’s not to say propaganda is gone completely. Many traditional Chavismo symbols show up on state media and government social media accounts. Maduro is even depicted as a Socialist superhero in a 1970’s Hanna-Barbera style cartoon broadcast on state television. His character, Super Bigote, which translates to Super Moustache, battles hyperinflation and fends off coup d’etats.

For some die-hard Chavistas, such as Luis Meza, it feels like an undoing of Chavez’s legacy.

A 68-year-old retiree from the state publishing office, Meza used to organize grassroots political meetings near his home in Catia, a working-class neighborhood in western Caracas. He has attempted to restore Chavez’s memory in his garage, which is filled with all sorts of memorabilia collected over the past quarter century: dolls, posters, newspaper clippings.  But few are interested in the meetings or the keepsakes these days, he said.

“It’s like the government wants to eliminate Chavez from the memory of the people.”