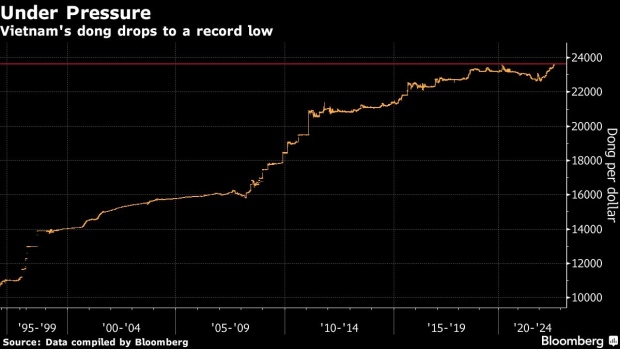 (Bloomberg) -- Vietnam’s Prime Minister Pham Minh Chinh has asked the central bank to consider raising the policy rates as the currency slumped to a record low.

The premier brought up the idea with the State Bank of Vietnam during a cabinet meeting in Hanoi on Thursday where policies were discussed following the US rate hike, according to a statement on the state website. At the same time, Chinh wants banks to keep their lending costs stable to support the pandemic recovery, it said.

The dong fell for a ninth straight day to 23,712 per dollar, the lowest since at least 1993, according to data compiled by Bloomberg, prompting speculation the central bank will intervene to curb the decline. The SBV set the daily reference rate at 23,316 dong per dollar on Thursday, the weakest since at least 2005, data show.

The premiere told the central bank to continue implementing monetary policy in a “cautious, active and flexible manner” while reiterating it must curb inflation while promoting growth, according to the posting.

The central bank “sees curbing inflation the biggest challenge,” according to the post, citing Governor Nguyen Thi Hong at the meeting. “The central bank will watch every market movement to take appropriate, suitable management steps.”

Headline inflation, currently hovering at 2.89%, is the slowest in Southeast Asia, thanks mainly to efforts by the government to regulate education and medical costs, among others.

At the same meeting, Chinh told the finance ministry to study and propose cutting taxes and fees to support businesses while the labor ministry was ordered to ensure supply to avoid disruptions in manufacturing, according to the post.