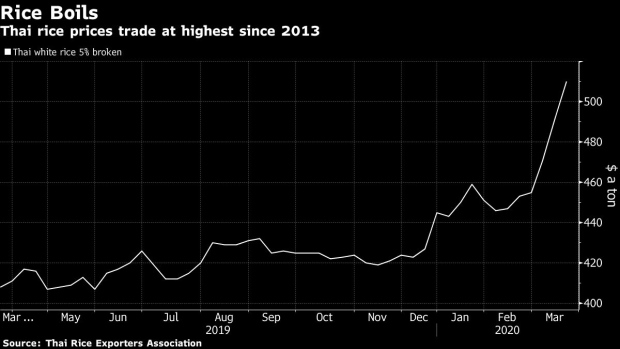 (Bloomberg) -- Vietnam’s rice traders have halted overseas shipments after the customs department ordered a temporary suspension of exports on Tuesday to ensure food security during the coronavirus pandemic. The country is the world’s third-largest exporter, behind India and Thailand.

“We have been unable to ship rice to the Philippines since customs clearance was suspended,” said Nguyen Van Thanh, director of Phuoc Thanh IV Co. “All we can do is to await the premier’s final say after the trade minister requested that the implementation of the customs decision be postponed.”

The company, based in the Mekong Delta rice bowl, has about 30 containers, each of about 25 tons, bound for the Philippines, that are awaiting customs clearance. It has already exported more than 10,000 tons of rice to the Philippines, Vietnam’s largest market, since early January, according to Thanh.

In the neighboring city of Can Tho, workers at Trung An High-Tech Agriculture Co. are still loading rice into containers, while some 20 containers are stuck at ports because they are unable to obtain customs clearance.

“The export suspension, if not lifted, will hurt the rice industry badly, from farmers and traders to exporters and importers,” said Pham Thai Binh, the company’s director. “We would spend a lot of money bringing the containers back from the ports, while the growers will suffer as prices will surely drop.”

Vietnam may face a rice shortage if the pace in shipments continues as high as the first two months of the year, while the Mekong Delta is experiencing drought and salinity, the trade ministry said on its website.

Because of this, the prime minister decided to temporarily suspend rice exports until the end of May following a proposal from the trade ministry, according to the post. But now the trade ministry is asking for more time to weigh the move because of the response from business.

“The ministry needs extra time to assess actual rice output in the winter-spring season, the number of signed contracts and actual inventories at rice companies,” according to the request addressed to the prime minister, signed by Trade Minister Tran Tuan Anh.