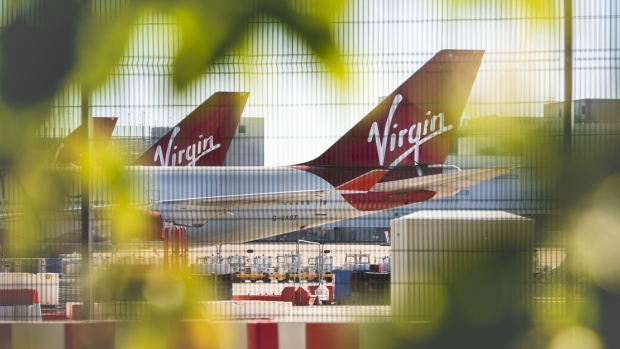 The ruling by Judge Richard Snowden clears the path for a bailout that will see U.S. hedge fund Davidson Kempner Capital Management provide funds to the carrier alongside Branson, its founder.

Snowden said he was “satisfied” with the plan. None of the creditors opposed the approval at the hearing.

Virgin Atlantic saw demand cut to a quarter of 2019 levels in the first half of the year and was denied aid by the U.K. government after the virus grounded flights. The Crawley, England-based carrier cut more than 3,000 staff and the remaining 6,500 jobs were at risk as Chief Executive Officer Shai Weiss warned that the airline will run out of cash within weeks without a rescue.

An American procedural court hearing is scheduled to take place as part of the firm’s Chapter 15 bankruptcy protection that’s aligned with the British proceedings.

“Achieving this significant milestone puts Virgin Atlantic in a position to rebuild its balance sheet, restore customer confidence and welcome passengers back to the skies, safely, as soon as they are ready to travel,” the company said in an emailed statement.

Last week, Virgin Atlantic secured the backing of trade suppliers, the last of four creditor groups that needed to agree for the plan to go ahead. Branson will inject around 200 million pounds in the business, while Davidson Kempner contributes about 170 million pounds to the package and trade creditors take a 20% haircut.

Under the airline’s U.K. court-sanctioned restructuring process, a judge could have pushed the plan through at the hearing even without the support of all creditors in a so-called cram-down of dissenting lenders.

Earlier this year, Branson’s Virgin Group saw its equity stake in Virgin Australia Holdings Ltd. wiped out when that airline collapsed. Bain Capital agreed to buy the carrier, and Branson may purchase a stake, Bloomberg has reported.

Even now, challenges loom for Virgin Atlantic, which operates a fleet of 40 wide-body planes.

The lucrative long-haul flights it relies on have been among the hardest hit by Covid-19, and demand is likely to be stuck in the doldrums for years. A moratorium on trans-Atlantic travel remains in place for most passengers as the disease continues to claim lives in the U.S.

What’s more, further virus flare ups could put many airlines in a battle for survival if the slow winter season is followed by more disruptions next year.

Virgin’s arch-rival British Airways Plc is expected to emerge from the crisis stronger than most competitors after taking a tough line on jobs. It sought to cut as many as 12,000 posts while renegotiating contracts for the remaining staff.