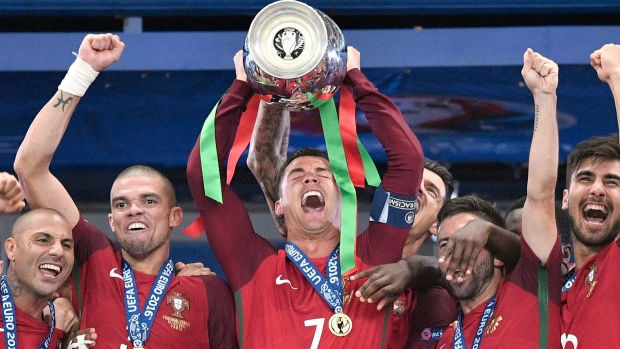 In this Sunday, July 10, 2016 file photo, Portugal's Cristiano Ronaldo holds the trophy at the end of the Euro 2016 final soccer match between Portugal and France at the Stade de France in Saint-Denis, north of Paris. , The Associated Press

Euro 2020 has been postponed until next year because of the risk the world’s third-largest sporting event would pose in spreading coronavirus across the continent.

The month-long soccer championship will now happen from June 11 to July 11, 2021, European football’s governing body UEFA said in a statement on its website.

The decision follows the suspension of national soccer leagues and will add a further drag on economies reeling from national lockdowns to contain the virus. Euro 2016, played in France, delivered a US$1.3 billion boost to the host nation.

“The health of all those involved in the game is the priority, as well as to avoid placing any unnecessary pressure on national public services involved in staging matches,” UEFA said.

The decision also frees up time in the summer to complete national club competitions that have been put on hold due to the COVID-19 emergency, UEFA said.

Shares in Britain’s biggest free-to-air commercial broadcaster, ITV Plc, were down 11 per cent at 3:31 p.m. in London.

In a statement, ITV said there would be no loss of sponsorship revenue due to the postponement, and that it looks forward to broadcasting the competition in 2021.

The quadrennial Euro tournament, which features Europe’s top 24 national squads, was due to be staged for the first time across the continent as far east as Azerbaijan and as far north as Glasgow, instead of being hosted by a single nation or pair of countries.

But the likelihood of tens of thousands of fans traveling across the continent to cheer on their country was deemed to dangerous a risk to public health, with most of Europe in some form of lockdown to battle the virus.

The cancellation of the competition, which was due to kick off on June 12, may pave the way for the International Olympic Committee to cancel the Tokyo Olympics, scheduled to start on July 24. The IOC on March 13 pledged its “full commitment” to the Tokyo games even as Greece cancelled the local leg of the torch relay and a poll showed nearly two-thirds of Japanese thought the Olympics should be delayed.

With national soccer leagues likely to be suspended for as long as governments enforce virus containment measures, there is a very real chance of the season not being completed, at a heavy cost to clubs.

“The amount of money at stake is massive and for some clubs, a cancellation of club competitions at both national and European level could prove to be financially unsustainable,” said Andrea Sartorial at consultants KPMG.

Clubs in the region’s top five soccer leagues stand to lose around 4 billion euros (US$4.38 billion) from a loss of match-day, broadcast and commercial income if no further games are played, according to KPMG estimates.

“Finishing the leagues across Europe is the right thing to do and would retain the integrity of the competitions. We might be able to achieve this if the Euros are suspended,” Leeds United Chief Executive Officer Angus Kinnear said earlier on the English club’s website.

Leeds United lies in a promotion position in the English League’s second tier and would stand to gain around 100 million pounds (us$121 million) in broadcast revenue per year if it moves up to the Premier League.