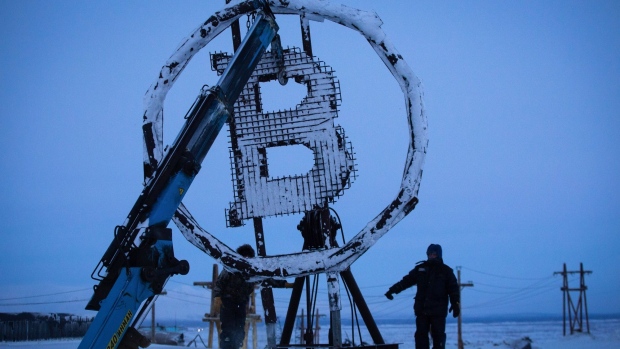 A bitcoin sculpture made from scrap metal is installed outside the BitCluster cryptocurrency mining farm in Norilsk, Russia. , Photographer: Andrey Rudakov/Bloomberg

Russian President Vladimir Putin signaled tolerance of cryptocurrencies, which are drawing increasing scrutiny from regulators around the world amid fears they can be used for money laundering and criminal activity.

Cryptocurrency “has the right to exist and can be used as a means of payment,” Putin said in an interview with CNBC that was posted on the Kremlin’s website Thursday. Still, he cautioned it was too soon to talk about using digital currencies for trading oil and other commodities that form the bulk of Russia’s exports.

Russia has sought alternatives to trading in dollars since being slapped with sanctions in 2014 following the annexation of Crimea, and Putin accuses the U.S. of using its currency as a weapon. Crypto backers argue decentralized money will eventually replace fiat currencies issued by central banks.

The Bank of Russia has repeatedly warned investors that the crypto market is extremely volatile, and digital currencies are not allowed to be used as a method of payment domestically. However, there are no plans for a blanket ban similar to China’s, Deputy Finance Minister Alexei Moiseev said this week, according to Interfax.

Putin’s tolerance of cryptocurrency comes as the White House considers launching a broad initiative to review and coordinate crypto policy across President Joe Biden’s administration that could lead to new regulations. China this year has cracked down on the industry and in September banned all crypto transactions.