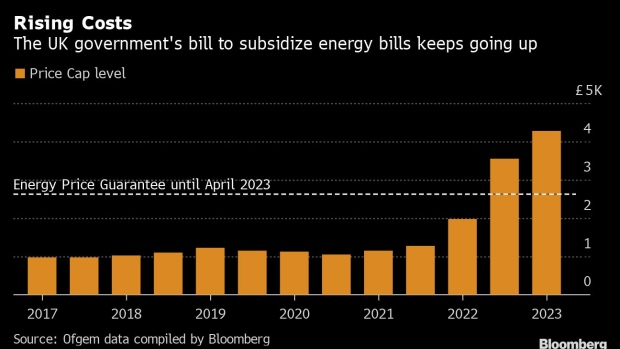 Residential apartments next to electricity pylons on the Barking Riverside development in London, UK, on Wednesday, Nov. 23, 2022. Barking and Dagenham is the only remaining London borough where house prices in the resale market have risen by double digits. Photographer: Chris Ratcliffe/Bloomberg , Bloomberg

(Bloomberg) -- More than 2 million of Britain’s most vulnerable households, facing the prospect of out-of-reach prices for gas and electricity, could shiver in silence this winter by disconnecting from the grid without their suppliers knowing, the chief executive of one utility warned.

As a result, there’s likely to be an increase in the number of winter illnesses and deaths among those using traditional prepayment meters, which have no digital connectivity and resemble those used in the 1970s, said Bill Bullen, founder of Utilita Energy. He submitted a “red flag” report to the UK government calling on companies to take several curative measures, including swapping old equipment for smart meters so suppliers can detect when someone has unplugged.

“Unless the customer has refused a smart meter, there’s no excuse for legacy meters to exist today,” Bullen said after his company surveyed 750 pay-as-you-go households. “Having no choice but to sit at home without heating or light is unacceptable, and our government and the regulator must intervene immediately to stop self-disconnections.”

The UK is gripped by the worst energy crisis in decades after Russia squeezed exports of natural gas to Europe in retaliation for war-related sanctions, propelling wholesale prices to records. The British government is spending about £16 billion ($20 billion) to subsidize household bills -- including those of prepayment customers -- as temperatures plummet and nations compete for ever-tighter supplies.

“We’re helping people already making desperate choices to keep bills down, like turning the heating off despite having a health condition,” said Gillian Cooper, head of energy policy for the Citizens Advice consumer group.

About 4.5 million households nationwide use prepayment meters, Utilita said. Designed to help users avoid racking up bills they can’t afford, the meters require people to pay for energy in advance -- at the post office or a shop, for example. About half of those customers have smart meters.

Once that credit runs out, lights go off and heaters shut down. For the half without smart meters, there’s no way for suppliers to know unless they tell them.

Bullen’s proposed solutions include eliminating any extra charges associated with pay-as-you-go accounts, “busting” the myth that switching to smart meters leads to more debt and erasing the stigma of poverty often associated with prepaid accounts. His company serves about 1.4 million customers.

So far, above-average temperatures have been a big relief for both the government and struggling consumers. Electricity supplier E.ON, which has more than 5 million retail customers, has seen a reduction in energy usage of about 10%, compared with seasonal averages, in recent weeks.

This month, though, is set to be a chilly one. In the UK, a colder-than-normal winter is expected, with temperatures below seasonal norms, although heavy rain and strong winds are less likely than in a typical December, Britain’s Met Office said.

There could even be snow, with thermometers falling 1C to 3C (1.8F to 5.4F) lower than usual, said Tyler Roys, a senior meteorologist for AccuWeather Inc.

“The cold is starting to creep in now, so the next month or two will be more telling,” said Tony Jordan, a senior partner at energy consultant Auxilione.