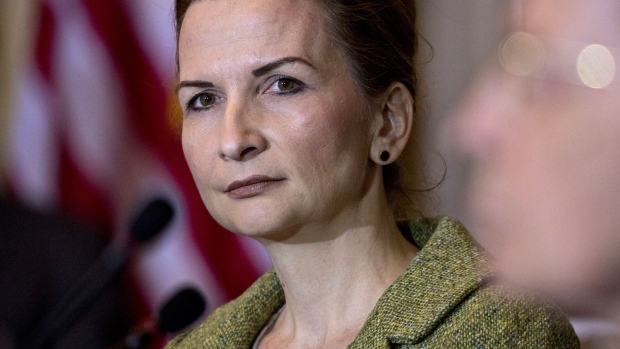 (Bloomberg) -- Wall Street firms are suddenly facing the prospect of a Democratic wish list of new rules in the coming year -- targeting bank mergers, cryptocurrencies and even climate change -- now that a key holdover of Donald Trump’s administration is abruptly standing aside.

The surprise announcement on New Year’s Eve that Jelena McWilliams will step down as chairman of the Federal Deposit Insurance Corp. -- an agency that plays a significant role in overseeing financial giants including JPMorgan Chase & Co. and Goldman Sachs Group Inc. -- will leave Federal Reserve Chair Jerome Powell, who has supported easing some bank constraints, one of few remaining officials who can block an era of tougher regulation sought by progressives.

The problem for Wall Street: Powell has pledged to defer to the Fed’s top regulatory official on industry supervision -- a position that Joe Biden’s White House is seeking to fill soon. Trump appointed Powell as Fed chair and Biden has renominated him for a second term.

The arcane drama that’s been simmering for weeks atop the FDIC -- where McWilliams has been squabbling with Democrats over procedures -- is forcing political strategists and financial lobbyists to revise expectations for 2022. The stakes for Wall Street are now higher than ever as Biden prepares to nominate the Fed’s next vice chair for supervision, who will then need to be confirmed by an evenly divided Senate. Candidates include Sarah Bloom Raskin, an ally of finance industry critic Senator Elizabeth Warren.

“Having a Fed vice chair for supervision is crucial to a progressive agenda,” said Renita Marcellin, a senior banking policy analyst at Americans for Financial Reform, which has called for a halt on all bank mergers, more rules for cryptocurrency firms and a crackdown on the private equity industry.

Once the Fed post is filled, progressive groups will go up against Wall Street’s lobbying might for a “long-term slog” over a slew of new rules, Marcellin said. “There’s a lot more to do than simply repairing the damage caused by Trump regulators.”

It’s a situation few in the financial industry saw coming mere weeks ago. As December began, McWilliams appeared to be dug in at the FDIC, where her term wasn’t set to expire until 2023. Wall Street and its allies on Capitol Hill saw her as a key safeguard against any Biden administration efforts to ramp up regulation because most major bank rules are implemented by three regulators including the FDIC, the Fed and the Office of the Comptroller of the Currency.

But early last month, two Democratic members of the FDIC’s board announced that the agency was seeking public comment on new rules for bank mergers. Soon after, the FDIC’s press office -- controlled by McWilliams -- issued a statement saying that the watchdog hadn’t approved any such request. And with that, a fight broke out for control of the agency, culminating with McWilliams’ announcement that she planned to leave, effective Feb. 4.

“It not only gives the administration the final agency seat it didn’t have but allows for greater coordination going forward,” Kelly said. “Watch for the Biden financial regulators to begin executing this year on the ambitious agendas they laid out in 2021.”

Senate Republicans have been taking turns expressing outrage over the loss of their ally atop the FDIC, with one lawmaker calling it a “coup,” in a sign that they’re gearing up for a broad fight over regulation. That could drag out the confirmation of the Fed’s next supervision chief.

“The Republican view is that the longer the Fed vice chair for supervision job is vacant, the better,” said Ian Katz, an analyst at Washington-based research firm Capital Alpha Partners. Biden’s pick will need support from every Democrat in the Senate, he said. “It will be bruising, and there’s zero margin for error.”