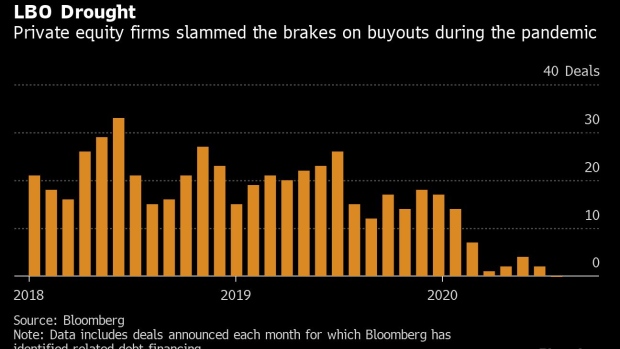 (Bloomberg) -- Amid one of the greatest credit booms ever, a key player in the financial world has been conspicuously absent. Private equity firms that would usually jump at the chance to go on a debt-fueled buying spree are only just tip-toeing back to the market.

In theory, business should be flourishing. Borrowing rates are close to record lows and investors are gorging on everything from rescue loans to shareholder payouts due in large part to historic support from the Federal Reserve. Banks are also ready to open the checkbooks after selling billions of dollars of debt for buyouts and acquisitions they feared they’d be stuck with as credit markets froze in March.

Yet sponsors that slammed the brakes on deals, citing too much uncertainty on how long the coronavirus outbreak will last, have been sitting it out until now.

“Two months ago, most of our clients who would have been thinking about acquisition financings, whether they’re corporate or sponsor, were tending to their own existing portfolios,” said John McAuley, head of North American leveraged finance at Citigroup Inc. “Now these companies and sponsors are looking at the opportunity set and being more proactive.”

Blackstone Group Inc.’s $4.7 billion acquisition of a stake in Ancestry.com Inc. is among the slim pickings that have emerged. With new business drying up, banks have under $10 billion of junk-rated debt they need to sell in the next few months, significantly less than the $30 billion to $50 billion range they’re typically used to at this time of year, according to bankers who arrange this type of financing.

The credit market’s hot streak has given a helping hand of course. When the Fed said in March it would buy corporate debt to backstop the financial system, investors were reassured and a path cleared for companies to borrow. Underwriters were also able to shed loans they’d agreed to provide before the onset of the virus in the U.S.

Banks have sidestepped potential losses as a result, offloading deals they couldn’t syndicate to investors as the market seized up, and even turning buyers away for some offerings. Among those was the $8 billion of loans and bonds that funded the tie-up of casino giants Eldorado Resorts Inc. and Caesars Entertainment Corp. -- a sector ravaged by Covid-19.

Read more: Fear is all but dead in credit markets backed by Fed

A group of banks led by JPMorgan Chase & Co. is now marketing $2.4 billion of leveraged loans to finance Veritas Capital’s acquisition of a unit of software firm DXC Technology Co., one of the last leveraged buyouts to be underwritten before credit markets froze.

Citizens Financial Group Inc. also relaunched for syndication this month a $285 million loan it had agreed to provide to J.H. Whitney Capital Partners-owned C.J. Foods Inc. for its acquisition of American Nutrition Inc. The bank was forced to fund the loan in March to allow the deal to close.

Talks about potential acquisitions are only just starting to pick up. Citigroup’s McAuley is having one or two discussions a week -- up from about one or two a month in the early days of the pandemic -- and the pace is accelerating.

But there’s always a lag between when deals are finalized and new debt offerings materalize, said Christopher Miller, director of capital markets at Neuberger Berman. “A lot of these financings could be early 2021 before we see them hit the high-yield market.”

The huge amounts of cash that sponsors are sitting on could help get things going again, especially now that most people have gotten used to working from home and private equity firms have a better handle on how companies might perform during the pandemic. And the buyer base is there, at least for now.

“Investors are starting to be able to differentiate between winners and losers and place bets in terms of how companies are going to come out the other side of this,” said Ben Burton, head of U.S. leveraged finance syndicate at Barclays Plc.