The most popular currency trade at the beginning of the year has splintered as Wall Street takes to opposing sides on the fate of the dollar in the world’s pandemic recovery.

JPMorgan Asset Management and T. Rowe Price see the dollar weakening as U.S. economic exceptionalism wanes, while PineBridge Investments expects it to strengthen. Currencies from the euro to the Brazilian real -- which suffered in the first quarter -- have attempted rallies this month leaving the greenback sitting at a closely watched technical crossroads.

“You have that idiosyncratic U.S. rates outperformance story being offset by the global cyclical upswing and by expensive valuations on the dollar,” said Ian Samson, a multi-asset fund manager at Fidelity International in Hong Kong, who is long the currency against the euro. “We see significant crosswinds blowing the dollar in different directions.” 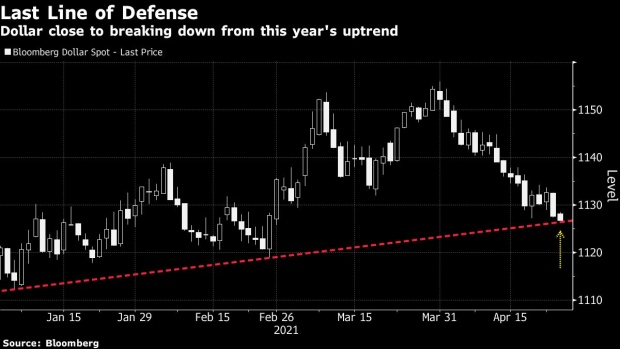 While most on Wall Street called for a weaker dollar in January, the world’s reserve currency went on a run that left speculative funds scrambling to cover US$30 billion of net short positions as Treasury yields climbed and expectations of rate hikes were brought forward. That trade soured this month, with the Bloomberg Dollar Spot Index slipping 2.2 per cent. A break of the uptrend in place from its first quarter would point the way to further downside. The gauge was little changed midday Monday in New York.

This week’s policy assessment by the Federal Reserve, which has held firm against hawkish expectations, could lend weight to bears. At the crux of dollar forecasts is expectations for the pace of recovery in the world’s biggest economy.

As the world strives to break free from the bruising economic effect of coronavirus restrictions, the U.S. has inoculated more citizens than any other country, giving it an edge in the race to re-open. Coupled with the Biden administration’s multi-trillion dollar fiscal stimulus and a Fed that’s allowing inflation to overshoot, it’s spurring the likes of PineBridge Investments to predict more dollar gains.

“U.S. Treasury yields could see another leg higher once we see some inflation come back,” with their premium over peers supporting the dollar, said Omar Slim, portfolio manager at PineBridge in Singapore. “Our view is that the dollar will retain a strengthening bias this year.”

Ten-year U.S. yields surged more than 80 basis points this year to 1.77 per cent in March, the highest since before the pandemic. The benchmark is around 1.57 per cent Monday, well above the 2021 low of 0.90 per cent. 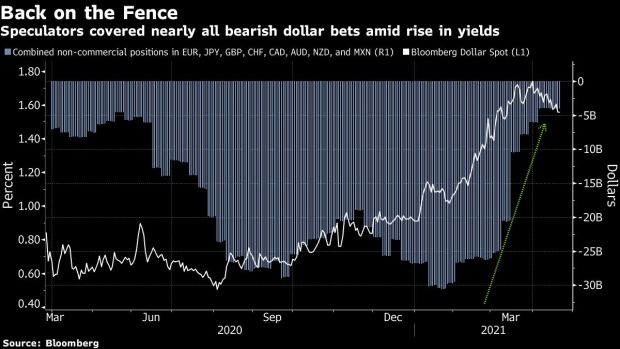 “Positive U.S. data might very easily kick-start a dollar rally again,” wrote Commerzbank AG currency strategist Thu Lan Nguyen in a note last week. “So for now U.S. dollar bears should make sure that they don’t get excited too soon.”

But not everyone is convinced the U.S. will continue outpacing peers.

For JPMorgan Asset’s Thushka Maharaj, its exceptionalism is set to fade as other nations catch-up on vaccine roll-outs and economic re-openings in the second half of the year.

The London-based strategist is keeping tabs on developed markets like Europe, the U.K. and Japan, and sees the euro outperforming the dollar in the medium term. “We are expecting the rebound in these economies to mirror what we are seeing in the U.S. right now,” she said.

Signs abound this trend is underway.

Coronavirus cases are rising in all regions except Europe, the World Health Organization said on Tuesday. The European Union is unleashing a new immunization drive to cover the bulk of its population within a few months, while on the economic front, recent PMI data have beaten expectations.

The euro has climbed about 3 per cent from a four-month low in March, and broke through the key US$1.20 level last week. 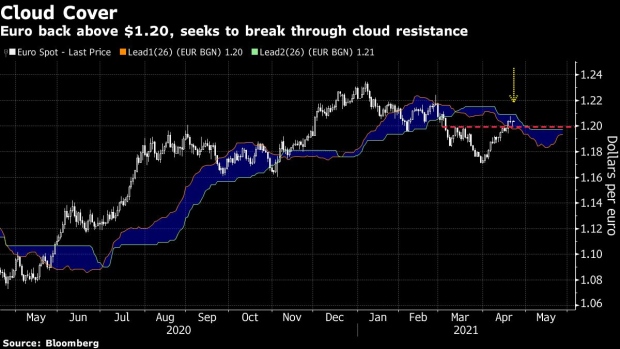 Some favor other currencies to best the greenback. T. Rowe’s Thomas Poullaouec sees more gains for Australia’s risk-sensitive dollar as China’s economy rebounds from the pandemic and demand for commodities rise.

Aberdeen Standard Investments’ Edwin Gutierrez is watching for opportunities to boost exposure to riskier developing currencies as “the rest of the world catches up on the vaccine roll-out.”

The Brazilian real, Indian rupee and Colombian peso -- which have been pummeled as the coronavirus raged across those countries -- stand out for the head of emerging-market sovereign debt in London.

In the meantime, vocal bears continue to warn about long-term headwinds for the dollar.

“Beyond the near term, we continue to see a structurally negative outlook for the U.S. currency,” wrote Goldman Sachs Group Inc. strategists including Zach Pandl in a note Tuesday. “The dollar is still substantially overvalued.”