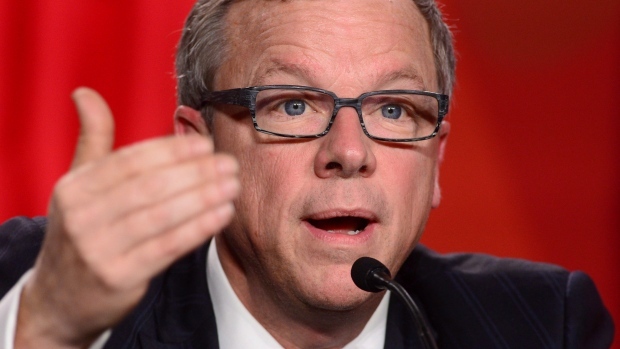 Saskatchewan Premier Brad Wall says TransCanada’s ever steeper uphill climb to get its Energy East pipeline proposal off the drawing board shows that when it comes to the energy sector, “we can’t get our act together.”

On Friday, the National Energy Board agreed to suspend TransCanada’s application proposal for 30 days at the request of the company.

TransCanada had said earlier in the week it needed more time to assess whether the project was still economically viable after the NEB announced in August it was expanding the scope of its review process to include upstream and downstream greenhouse gas emissions, among other factors.

“We need to have much more reasoned dialogue about the future of the energy sector in our country, and all that it contributes,” Wall said in a statement late Friday.

“Oil will continue to be necessary to our survival and way of life for decades, even as the world transitions to cleaner fuels,” he said. “Canada has the third largest oil reserves on the planet. Yet we only sell our oil to one customer, the United States, because we can’t get it to tidewater.”

Although the Energy East project has many supporters, it has also been facing increased challenges since it was originally proposed in 2013, specifically because of the potential environmental impact.

But Wall says whether people like the oil and gas industry or not, the world still needs oil.

“Why shouldn't Canada be the leading safe, reliable, and sustainable supplier for that demand?” he said.

He also believes part of the challenge is changing people’s perception of the industry.

“It is my hope that we do a better job of telling the story of this industry that employs hundreds of thousands of Canadians, while providing billions to government coffers to fund our schools, hospitals and highways.”

Wall added it is up to Prime Minister Justin Trudeau to follow through on a pledge to get Canada’s resources to a global market.

“Canada needs Energy East, and we need a Prime Minister to champion this project and see it through for the benefit of all Canadians.”