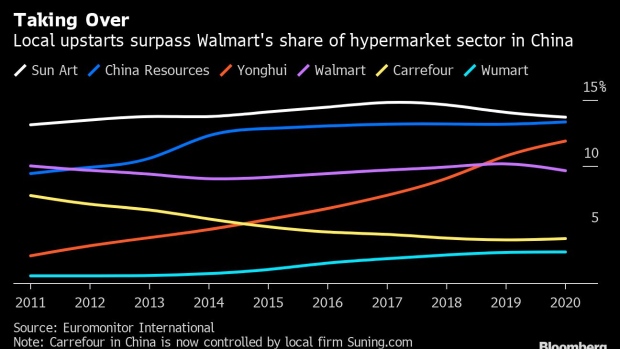 (Bloomberg) -- In the months before the delta variant upended domestic travel in China, Walmart Inc. would regularly have employees fly to cities like Shanghai to observe and take photos of what its competitors were up to, according to people familiar with company’s practices. At times, they got caught and were asked to leave.

While checking out rivals is not uncommon in the industry, the task took on added urgency for the world’s biggest retailer in the past year. A quarter century after it entered China and transformed the way people shop for groceries, Walmart is at a crossroads. It’s fallen from No. 2 in 2011 to fourth in China’s hypermarket sector, with no gains in market share amid cutthroat competition from local players like e-commerce giant Alibaba Group Holding Ltd. that’s already forced out Germany’s Metro AG and France’s Carrefour SA.

Walmart has taken solace in the success of its members-only franchise, Sam’s Club. In contrast to the U.S., where the brand is seen as a no-frills, bulk shopping destination, in China it sells premium, imported products, attracting middle-class shoppers. But more rivals are now entering the membership shopping space, triggering a rethink of Walmart’s strategy in a market which, while only accounting for 2.1% of global revenue, represents a major strategic and growth opportunity for the retailer.

“China is an important market for Walmart because it still represents a long-term growth opportunity, which explains why the company is investing in expertise to try to improve its results there,” said Jennifer Bartashus, a consumer staples analyst at Bloomberg Intelligence. “While Walmart U.S. has seen a surge in sales growth due to the pandemic and has a strong core business, the company still believes that international success is critical to long-term growth.”

As the growth gap widens between its China hypermarket and membership units, Walmart is pushing closer integration between their functions so that executives from the faster-growing business can play a bigger role in shaping the company’s overall China strategy, according to people familiar with the matter. Walmart China hired McKinsey & Co Inc for its strategy review, the people added.

For example, some Sam’s Club managers are now co-leading hypermarket operations, while there have been job cuts and executive departures on the hypermarket side. The overall performance of the China business was also added as a metric in bonus calculations this year to encourage employees to think outside of their own silos, according to an internal memo seen by Bloomberg.

Walmart’s strategy in China and elsewhere is to build strong local businesses in what is a highly competitive industry, a representative for the retailer said. In China, the company is transforming into an “omni-channel” business. It’s “not factual” that some hypermarket and membership unit operations have been merged so that Sam’s Club executives can play a bigger role in overall strategy, nor that some of those managers are co-leading some hypermarket operations, she said, without elaborating. Walmart doesn’t comment on compensation policies.

Sales in China’s supermarket and hypermarket sector fell more than 7% in the second quarter of 2021 compared to a year ago, according to data from Kantar Worldpanel, as more Chinese shoppers shift online. Walmart has also flagged softening traffic in its hypermarkets, with the number of such stores in China falling to 378 from 403 at the end of January.

In contrast, the membership-based sector is rapidly growing in popularity as consumers seek out imported goods such as Australian steaks and Belgian chocolates at lower prices.

“The winning formula behind the membership stores lies in their unique product offering and extreme value for money,” said Tianbing Zhang, managing partner of consumer products and retail sector at Deloitte Asia Pacific.

Walmart opened its first Sam’s Club in China in 1996. Costco Wholesale Corp., its main American rival, did not enter the country until 2019. Costco has locked in additional land parcels in wealthy cities such as Hangzhou, in China’s east, and Shenzhen near the border with Hong Kong.

Both are now facing stiff competition from domestic players, particularly as the pandemic accentuates demand for members-only shopping. The model has taken off in China because the products are filtered and have a reputation for higher quality. Specials are also regularly refreshed, while the membership aspect makes it feel more exclusive.

Alibaba, which already controls Sun Art, China’s biggest supermarket chain, is making a splash in the membership segment through its Hema unit, known for its automated storefronts and delivery service. Hema started Store X, its first of the so-called big-box stores, in Shanghai in October 2020 and plans to have 11 outlets by the end of this year. The Hangzhou-based giant, whose online platform Taobao rules e-shopping in China, also has a stake in Carrefour operator Suning.com, which will also open its first members-only store this year.

Other competitors include Metro, a chain operated by Wumei Technology Group, which turned two hypermarkets into members-only stores in June with more conversions in the pipeline.

“The business environment in China is evolving so fast that foreign operators like Walmart are in defensive mode,” said Lingyi Zhao, chief retail and e-commerce analyst at SWS Research in Beijing. “Their edge from the early days is shrinking.”

Though Sam’s Club business in China is growing quickly -- new sign-ups more than doubled versus a year ago in the second quarter, according to Walmart’s financial reports -- the company acknowledges that it needs to expand its network of stores at a much faster pace to maintain its edge.

It plans to have 100 stores in China by 2028 from its current 33. The unit also said in July it would test turning some hypermarkets into membership stores and building new ones in city centers, marking a break from the past where outlets typically opened in locations with large parking lots for weekend shopping trips.

Tina Zhang, chief merchandising officer at Sam’s Club China, said that the unit’s ability to source with its U.S. counterpart helps it gets wider access and better prices -- an advantage Chinese rivals don’t have.

For Walmart, how its China businesses fare also has important implications for its home market as the country has been crucial in teaching its executives about digital evolution. Prior to the pandemic, managers in other locations were invited to travel to China each year in part to witness the latest in consumer tech trends, according to a person familiar with the matter.

“The importance of China for Walmart is learning. You can’t put a number on that,” said Bloomberg Intelligence’s Bartashus. “Chinese customers are so far ahead of the U.S. customers.”