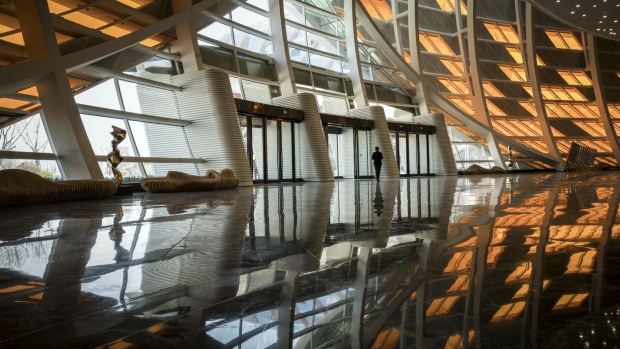 (Bloomberg) -- Dalian Wanda Group Co.’s commercial property management unit has started preparations with banks for its Hong Kong initial public offering, which could raise about $3 billion, according to people familiar with the matter.

Citic Securities Co., Goldman Sachs Group Inc. and JPMorgan Chase & Co. are working with Wanda Light Asset Commercial Management Co. to prepare for the first-time share sale, the people said. The offering could happen as soon as this year, said the people, who asked not to be identified as the information is private.

A Hong Kong IPO would come after the commercial property management firm withdrew its A-share listing in March, adding it will restructure its “asset light” commercial operation and go public at home and abroad as soon as possible. Wanda Light Asset is looking to raise about 20 billion yuan ($3.1 billion) in a pre-IPO funding round, in which more than 20 investors have expressed interest, Bloomberg News reported last month.

Wanda Light Asset primarily operates and manages its parent’s Wanda Plaza commercial complexes, including 368 in operation and another 155 under construction. In March, the local government in Zhuhai, a city in Guangdong province, invested 3 billion yuan into the unit, according to a statement at that time. The company is now headquartered in Hengqin New Area of Zhuhai.

Deliberations are ongoing and more banks could be added, the people said. Representatives for Citic Securities, Goldman Sachs and JPMorgan declined to comment, while a representative for Wanda didn’t immediately respond to requests for comment.