Why the cost of shorting Tilray has suddenly soared 900%

The demand to short shares of the marijuana company Tilray Inc. (TLRY.O) is smoking hot.

The cost to finance a new short position in the cannabis company soared to as high as 900 percent on Wednesday, data by financial analytics firm S3 Partners LLC show. The cannabis company trades at about US$82.59 a share, meaning it would cost nine times as much - US$743.31 - to borrow the stock per year.

“Our desk can’t remember any rates higher than these,” Ihor Dusaniwsky, S3 Partners’ managing director of predictive analytics, said in a telephone interview.

The 900 per cent borrow cost comes down to more than US$2 per day, meaning the stock will have to decline by at least that amount for an investor to break even, excluding other expenses. At that rate, it may be prohibitively expensive for a borrower to hold shares for too long without renegotiating the fee or finding a cheaper deal. Still, this highlights the urgency some investors have to short Tilray -- a stock that’s risen 19 per cent in the past three days alone.

Tilray became a summer sensation after its July initial public offering. One day in September it doubled in value. It has yet to reclaim its high that day near US$214, and is down 61 per cent since then. Shorts, including Aristides Capital LLC ’s Chris Brown have said the stock was overvalued. And on Tuesday, Piper Jaffray’s Michael Lavery initiated coverage of Tilray with a buy, saying it should benefit from a beverage deal with Budweiser brewer Anheuser-Busch InBev NV.

The high borrow costs in part may be tied to the limited availability of shares. Of the 76.5 million shares outstanding, according to data compiled by Bloomberg, more than 75 per cent is held by Privateer Holdings -- an entity co-founded and chaired by Tilray’s own Chief Executive Officer Brendan Kennedy.

“Pretty much all of the available stock loan inventory has been taken down,” Dusaniwsky said. “It is a very rare occurrence that there is virtually no stock loan availability – there are always ‘scraps’ available, a few thousand shares found here and there.” 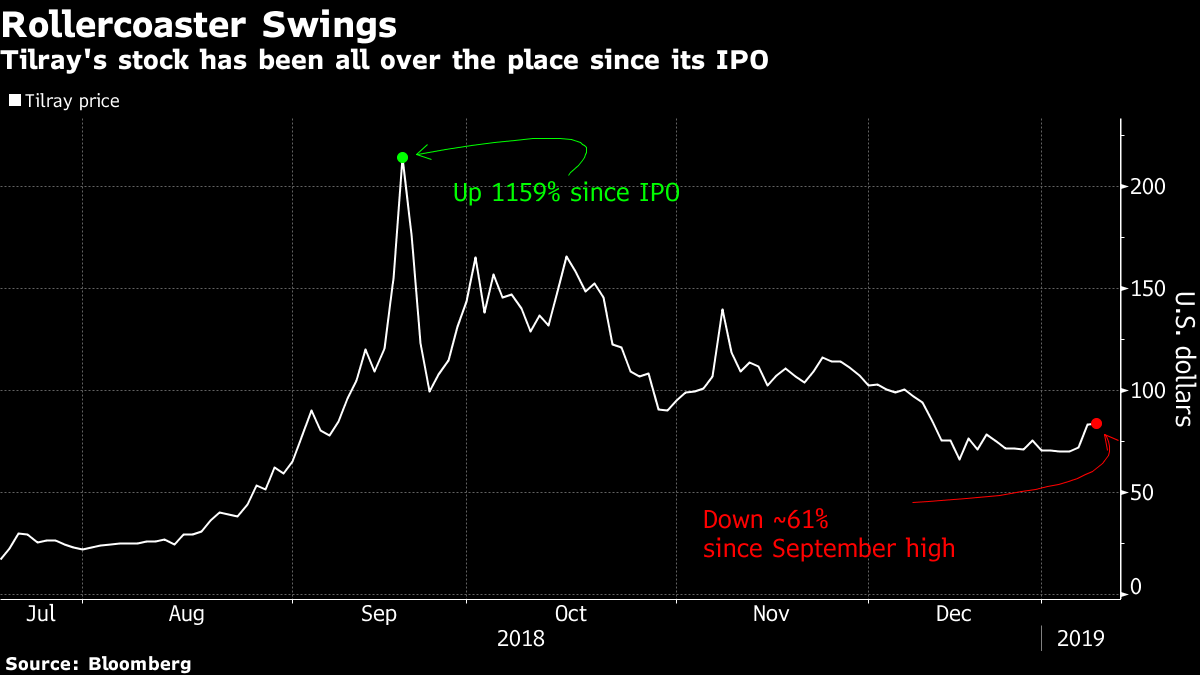