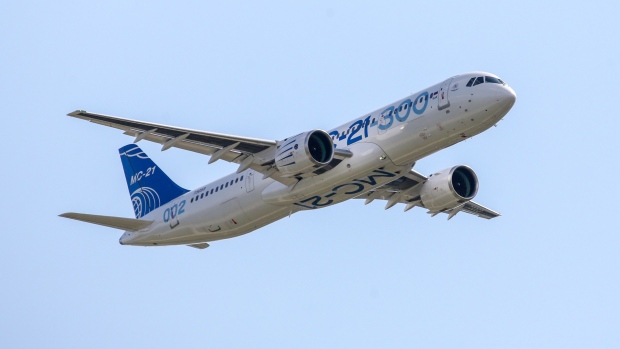 (Bloomberg) -- International sanctions triggered by the invasion of Ukraine are poised to derail a Russian effort to challenge Airbus SE and Boeing Co. in single-aisle jets.

Irkut Corp.’s MC-21 jetliner, set to enter service this year, had already been hit by delays and cost overruns due to pre-existing sanctions. The plane, which features composite wings and is designed to carry as many as 211 people, is due to commence deliveries to Russian airlines this year, starting with flag carrier Aeroflot PJSC.

European aerospace firms are now halting exports and warning of losses on the program due to the imposition of much tougher restrictions following the country’s invasion of Ukraine. U.S. suppliers like Raytheon Technologies Corp., which provides one of two engine choices, haven’t detailed their plans.

The MC-21 is the first full-size aircraft designed in Russia since the fall of the Soviet Union more than three decades ago, and represents the country’s bid to break the stranglehold of Airbus and Boeing on the short-haul jetliner market. A version using engines from Raytheon’s Pratt & Whitney division received Russian type certification at the end of last year.

But the fresh wave of sanctions unleashed by the Russian war in Ukraine could put the timing of the launch at risk, and potentially throw the whole project into limbo.

“It needs to be reinvented and that’s going to take a bunch of years,” said Richard Aboulafia, an aviation analyst with consultancy AeroDynamic Advisory. “It’ll go from an interesting plane to a completely hopeless one.”

British aerospace firm Meggitt Plc, in line to supply the wheels and brakes for the MC-21, warned Thursday that it could see a “material” writedown in the next 12 months due to its involvement in the program. A spokesman said the company already ceased all import and export shipments with Russia.

Fellow British firm Senior Plc, which was due to provide the cabin air recirculation systems, told analysts last Monday that it can no longer participate given sanctions.

Irkut, part of state-owned United Aircraft Corp., makes fighter jets for the Russian military. It initially targeted 2016 for the MC-21’s entry into service, but that timeline was set back by previous sanctions.

The company declined to comment. It found domestic partners to build composite wings for the jetliner after former U.S. President Donald Trump expanded restrictions during his presidency to include civil aerospace programs. It said in 2020 that it would target switching to Russian-produced avionics by 2023.

With Europe banning the supply of aircraft parts and technology to Russia, and the U.S. imposing export controls, more components will need to be produced in Russia -- but this would likely take years, drive up the cost and result in an inferior product, Aboulafia said.

That’s exactly what the U.S. and European sanctions intend. The clampdowns will cut off more than half of Russia’s high-tech imports and “degrade their aerospace industry,” President Joe Biden said on Feb. 24.

Like China’s Comac C919, the MC-21 has components from a number of foreign suppliers. U.S. firms also include Raytheon’s Collins Aerospace and Honeywell International Inc., whose contributions include navigation and power systems, according to its website.

Raytheon, based in Waltham, Mass., and Charlotte, N.C.-based Honeywell declined to comment.

France’s Safran SA will apply sanctions as outlined by authorities, according to a spokeswoman. The French engine maker had agreed to supply 11 types of equipment, including cockpit components and oxygen systems.

A version of the MC-21 that uses the Russian engine option was flown at the Dubai Airshow in November.

Russia could build domestic support for a plane with all local components over the long term, said aerospace industry analyst John Strickland. Both Boeing and Airbus have withdrawn supplies of parts and support services for Russian airlines due to the conflict.

Putin, who on Saturday moved to shield Russian airlines from having planes repossessed from foreign owners -- meaning they will have to be maintained locally, and without OEM support -- indicated he’s prepared to play a long game.

“We will just have to push some projects a bit to the right -- to build up new competencies, as we had in a series of other projects, such as aviation,” he said in a March 4 broadcast, discussing international sanctions in general. “But we will still solve the tasks ahead of us. Even more so, we will win from this because, as I had said earlier, we will garner new competencies.”