The trend out of profitless tech into value and commodities to continue: Hedge fund manager

Waratah Capital Advisors’ biggest hedge fund posted its first-ever annual loss in 2022, but the Canadian firm still delivered positive returns on most of its products, including its flagship equity funds.

The investment manager’s Waratah Performance fund declined 1 per cent  last year, breaking an unbeaten streak of gains since the firm was founded in 2010, according to an investor letter seen by Bloomberg. The fund, which follows a long-short strategy that’s focused on North American stocks, has returned 220 per cent  since inception.

The largest long exposures in the $878 million (US$657 million) fund at year-end were amusement-park operator Cedar Fair and asset manager Sprott Inc., which fell 17 per cent  and 21 per cent  last year, respectively. The firm is one of the largest shareholders of both companies, owning more than 3 per cent  of each, according to data compiled by Bloomberg. Waratah declined to comment. 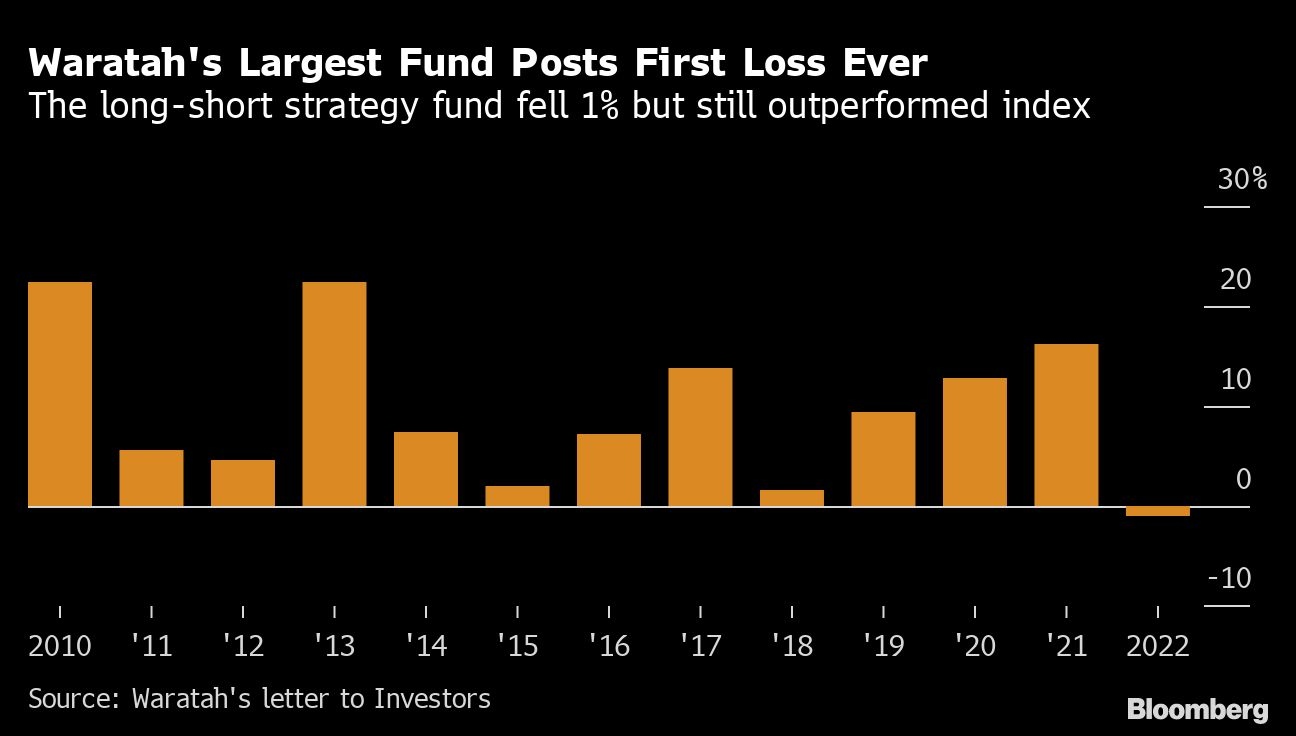 Stock and bond markets were roiled last year by central banks’ aggressive rate increases to quell inflation, as well as geopolitical and economic uncertainty caused by Russia’s war in Ukraine. The S&P 500 plunged 19 per cent  in its worst year since 2008, while Canada’s S&P/TSX Composite Index posted its first decline in four years.

The firm’s two flagship funds, known as Waratah One and Waratah One X, gained 3 per cent  and 4.2 per cent , respectively. The former has never posted an annual loss in its 13-year history; it has $336 million invested in a long-short portfolio of North American stocks that tries to hedge market exposure for lower-volatility returns, according to fund documents.

Waratah’s newest fund, a long-short yield fund that focuses on North American bonds, gained 2.3 per cent  over its first four months. Top holdings include debt issued by Canadian pipeline operator Enbridge Inc. and real estate firm Morguard Corp. About 85 per cent  of the portfolio is in investment-grade debt.

The Toronto-based firm, founded by Brad Dunkley and Blair Levinsky, manages $4.1 billion for wealthy individuals, family offices, foundations and pension funds across its hedge funds and private equity strategies, according to its website.