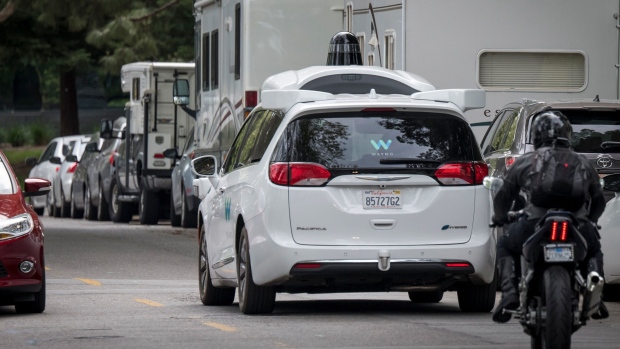 More than 100,000 trips have been taken in robotaxis operated by Waymo, the self-driving car unit of Alphabet Inc. Now the service is expanding to iPhone users.

On the first anniversary of its pilot program in Chandler, Arizona, Waymo said it will begin offering an iOS app for its robot ride-hailing service for iPhones. It also revealed new details of the pioneering robotaxi service, which has struggled to offer fully autonomous service without human “safety drivers” behind the wheel to take over in an emergency.

Waymo, which began a decade ago as Google’s self-driving car project, said its service has 1,500 monthly users and has tripled the number of weekly rides since January. Since late summer, Waymo has offered a “rider only” option without human safety drivers to a test group of a few hundred commuters. Those people aren’t always charged, while others pay rates that are competitive with Uber and Lyft ride-hailing services, John Krafcik, Waymo’s chief executive officer has said.

Most Waymo rides occur in the late afternoon and evening, with commuters using the service for everything from getting to work to having a “date night,” Dan Chu, the company’s chief product officer, wrote in a blog post.

The service is expanding and will add more riders who will join a waitlist by using the new iOS app. The service has been available on Android phones since the spring.

Still, Krafcik told reporters in October he is unsure when commercial robotaxis will take off. General Motors Co. has delayed the rollout of its service and Ford Motor Co.’s CEO has said the industry overestimated the arrival of self-driving cars.

“It’s an extremely challenging thing to do,” Krafcik told reporters at a dinner in Detroit. “I do share your sense of uncertainty, even in my role. I don’t know precisely when everything is going to be ready, but I know I am supremely confident that it will be.”