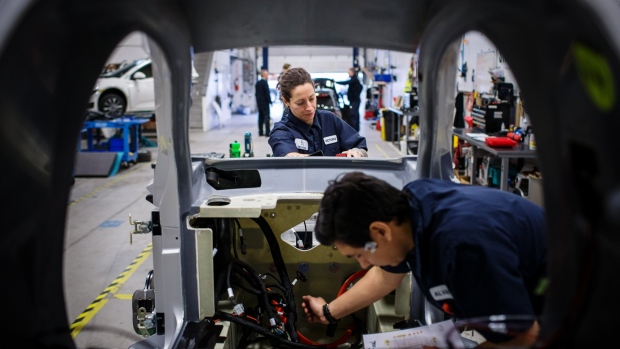 Workers assemble an Electra Meccanica Vehicles Corp. Solo electric car at the company's production facility in New Westminster, British Columbia, Canada, on Thursday, Dec. 20, 2018. Electra Meccanica, which has a market value of just $41 million, yet $2.4 billion in pre-orders, says its quirky reimagination of an automobile aims to redefine the category. , Bloomberg

Canada’s economy practically came to a halt in the final three months of 2018, in a much deeper-than- expected slowdown that brings the underlying strength of the expansion into doubt.

The country's economy grew by just 0.1 percent in the fourth quarter, for an annualized pace of 0.4 percent, Statistics Canada said Friday from Ottawa. That's the worst quarterly performance in two and a half years, down from annualized 2 percent in the third quarter and well below economist expectations for a 1 percent annualized increase.

While a slowdown was widely expected in the final months of the year due to falling oil prices, it's a much bleaker picture than anyone anticipated with weakness extending well beyond the energy sector. Consumption spending grew at the slowest pace in almost four years, housing fell by the most in a decade, business investment dropped sharply for a second straight quarter, and domestic demand posted its largest decline since 2015.

The only thing that kept the nation's economy from contracting was a build-up in inventories as companies stockpiled goods.

At the very least, the numbers suggest that heightened uncertainty -- everything from the impact of higher interest rates to potential trade wars and oil-sector woes -- has made a real impact on both consumer and business sentiment. The question now is what the weaker-than-expected data suggests about the economy's ability to rebound back to more normal growth levels.

Most economists had been expecting the soft patch would come to an end by this spring and growth would accelerate closer to 2 percent for the rest of the year. No one, however, expected the economy would need to come back from such a low point. The Bank of Canada's latest forecast, from January, is for annualized growth of 1.3 percent in the fourth quarter and 0.8 percent in the first quarter, before the expansion accelerates back to above 2 percent growth by next year.

Until recently, the economy had been doing relatively well even in the face of higher rates. It grew by a Group-of-Seven- best 3 percent in 2017, and expanded at a healthy clip in the first half of last year -- prompting the Bank of Canada to press ahead with higher borrowing costs.

But even that strength had been overstated, with Statistics Canada revising down its estimates for first half growth to 2 percent from 2.3 percent. For all of 2018, the economy grew by 1.8 percent -- below the Bank of Canada's estimate for 2 percent. Monthly data released Friday show the economy ended the year contracting, with December gross domestic product down 0.1 percent.

The data suggest rising interest rates may be having a bigger impact on consumers than expected. Consumption slowed to an annualized 0.7 percent pace in the four quarter, the weakest growth since the start of 2015 as households increased their savings.

The economy also wasn't able to get a contribution from exporters who have helped lift growth over the past year. Exports recorded an annualized 0.2 percent drop in the fourth quarter. Imports also declined, down 1.1 percent.

The biggest contributor to growth came from inventories -- driven by machinery, food and wood producers.