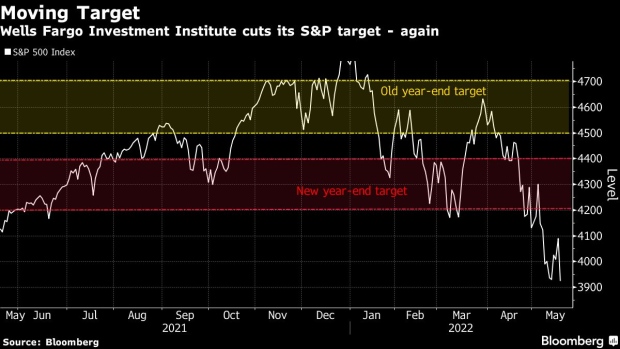 (Bloomberg) -- Three weeks after Wells Fargo Investment Institute cut its view on the S&P 500, it did this again, saying a mild recession is now its base-case view.

The investment advisory firm slashed its year-end target by 300 points Wednesday, on top of the 200-point cut it made late April. The advisory arm of Wells Fargo & Co. now sees the gauge trading in the 4,200-4,400 range by Christmas. That represents a drop of as much as 7.7% for the full year, but a gain of up to 12% from current levels.

“We have noted a growing recession risk since early this year,” Wells Fargo Investment Institute’s strategists wrote in a note to clients. “As we weigh the latest monthly and weekly data, the economy has crossed a probability level that makes a mild and short-lived recession our base case.”

The strategists’ concern -- that the Federal Reserve will slow the economy faster than it tames inflation -- is shared by many on Wall Street, with JPMorgan Chase & Co.’s estimates showing the stock market prices in a a 70% chance of a recession. Add the war in Ukraine and coronavirus lockdowns in China, and that’s a recipe for days like Wednesday, when the S&P 500 posted the biggest rout in almost two years.

WFII’s S&P 500 cut echoes a similar move at BMO Capital Markets, where the firm’s chief investment strategist cut his 2022 target for the S&P 500 to 4,800, citing an “aggressive” rerating in the market amid its transition to normalcy. Earlier on Wednesday, Cantor Fitzgerald threw in the towel on its May 2 call that US stocks are poised for a short-term rebound.