Wells Fargo & Co., the largest employer among U.S. banks, is preparing to cut thousands of jobs starting later this year, potentially setting a bleak precedent for an industry that’s been resisting mass layoffs as the coronavirus pandemic worsens.

Pressure to dramatically reduce costs is coming to a head inside the bank, prompting executives to draft plans that may ultimately eliminate tens of thousands of positions, people with knowledge of the confidential talks said, asking not to be named. Some analysts predict the lender may post its first quarterly loss in more than a decade next week, when the firm is set to reveal how much it’s lowering its dividend following Federal Reserve stress tests.

Though the strains at Wells Fargo are more acute than at rivals, any cuts would reverberate across an industry facing mounting loan losses. Reductions by such a prominent firm could test the resolve of competitors that pledged to provide job security for their massive workforces, and in turn, a bulwark for the nation’s economy.

A spokesperson for the San Francisco-based bank declined to comment. Shares of the lender fell 1.7 per cent to US$24.14 at 9:55 a.m. in New York. The stock is down 55 per cent this year.

Executives haven’t yet adopted a specific target for shrinking the bank’s workforce of about 263,000, and they aren’t likely to detail a plan when posting quarterly results, one of the people said. Yet among analysts and investors, Chief Executive Officer Charlie Scharf already has made little secret of his concern about costs, calling them “way too high” during a presentation in May. 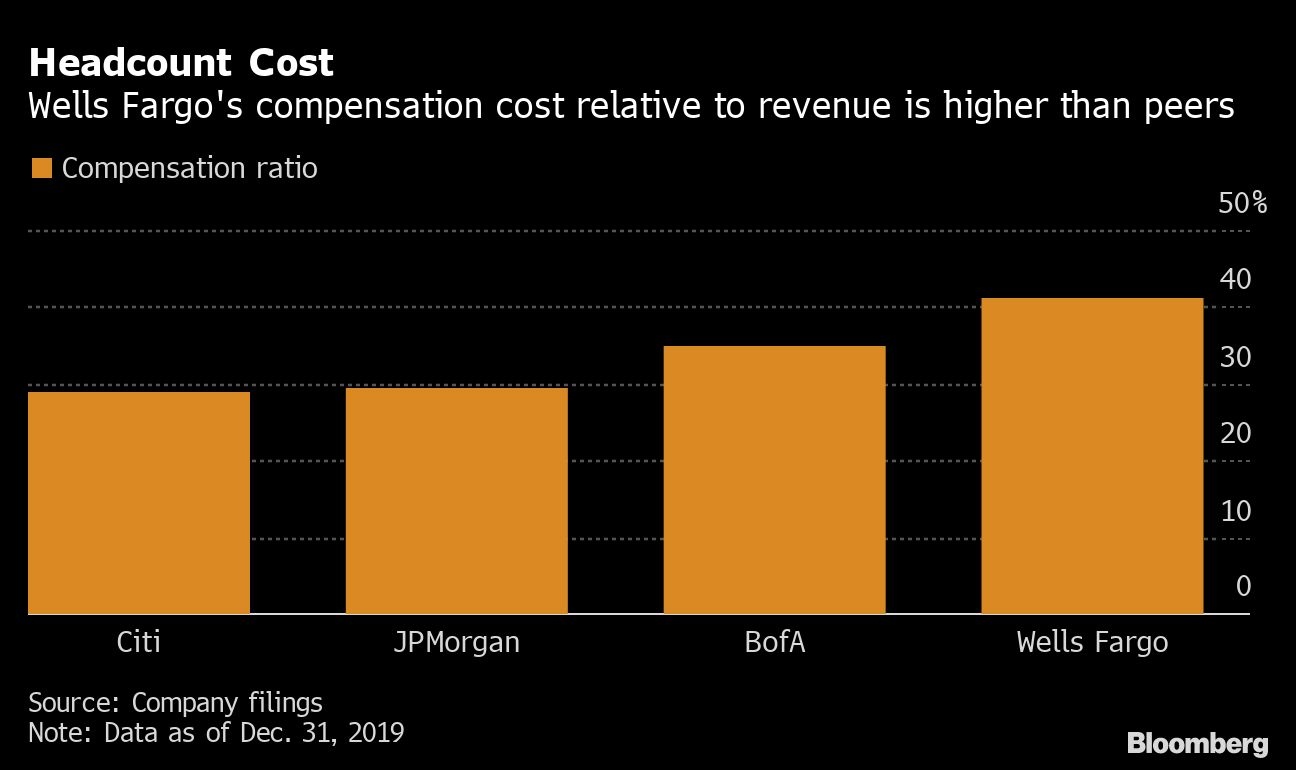 The firm is significantly less efficient than its largest competitors, a situation that’s been exacerbated by years of regulatory probes and sanctions, and now the pandemic.

Last month, Scharf acknowledged the company would lower its dividend in response to stress tests and its own dimming assumptions about the economic outlook, which he noted had “changed significantly” in recent months.

Lenders including JPMorgan Chase & Co., Bank of America Corp. and Citigroup Inc. plan to maintain their payouts this quarter. But as the Fed keeps an eye on mounting U.S. infections, it has said it could eventually restrict how much banks pay out using a formula based on earnings. If Wells Fargo offsets the pain for its shareholders by cutting compensation expenses, that could set a precedent for others in the industry.

“Not every financial institution came into this tumultuous time period on really sound footing, and those problems haven’t gone away because of the pandemic,” said Andy Challenger, senior vice president at staffing adviser Challenger, Gray & Christmas. “We very well may see a resumption of normal cutting as the pressure builds up within these organizations.”

Since taking over in October, Scharf has been reviewing Wells Fargo’s businesses and developing strategy changes that were widely expected to include some reductions. Still, the firm joined big banks on both sides of the Atlantic in pledging to suspend new job cuts when the pandemic began upending commerce and markets this year.

European banks including HSBC Holdings Plc and Deutsche Bank AG have since said they would resume reductions, but U.S. banks have held firm.

Some firms, including Goldman Sachs Group Inc., have indicated they’ll maintain their pledge through the end of the 2020. Wells Fargo has been more conservative, implementing a shorter moratorium and then adjusting it, people with knowledge of the planning said. Its current freeze expires this month, though it could be extended.

The firm’s expenses have surged in recent years on legal costs, remediation and fines related to a series of scandals that began with the 2016 revelation that employees opened unauthorized customer accounts to meet sales goals. Yet its job cuts have been relatively modest over the past decade, a period in which Bank of America shrank its workforce by about 80,000 people. Wells Fargo has more people than its top competitor, JPMorgan, despite pulling in about US$30 billion less revenue last year.

Scharf was known as a cost-cutter when the board enlisted him, and he’s warned there will be much work to be done once he finishes a review aimed at reviving profitability. The CEO said in May that he hopes to create a road map for the company by the end of the year.

Chief Financial Officer John Shrewsberry gave a glimpse of what’s ahead at a conference last month: “There will come a time, and I assume at some point this year, when we get back to executing on programs that are in place, and some that are still under development, that are designed to get our total expense base, which for us means our total headcount, to as lean a state as we can responsibly operate.”