WeWork Delays IPO, Bonds Plunge by Most on Record

WeWork pushed back its much-awaited initial public offering as the company seeks more time to allay investor doubts over its governance, slashed valuation and business prospects.

The offering is likely to be postponed until at least October, people familiar with the matter said Monday. The office-rental unicorn had planned to begin making its pitch to investors in a roadshow as soon as this week.

“The We Co. is looking forward to our upcoming IPO, which we expect to be completed by the end of the year,” the company said in a statement on Monday evening in New York.

The IPO was expected to be the next step in WeWork’s rapid growth and mark a victory for Japanese telecom giant SoftBank Group Corp.’s plan to pour billions into startups around the world. Instead, it turned into a dramatic struggle between the company’s chief executive officer, bankers and SoftBank over whether to plow ahead in spite of a plunging valuation or pull the deal.

The delay will give advisers more time to drum up interest and may allow the company to show investors another quarter’s worth of results. Still, the value of WeWork’s bonds sunk the most on record Tuesday on concerns that the cash-burning company will miss out not only on the more than US$3 billion it planned to raise in the offering, but also a $6 billion credit facility tied to a successful IPO. WeWork must carry out the offering by Dec. 31 to get the loan, Bloomberg previously reported. 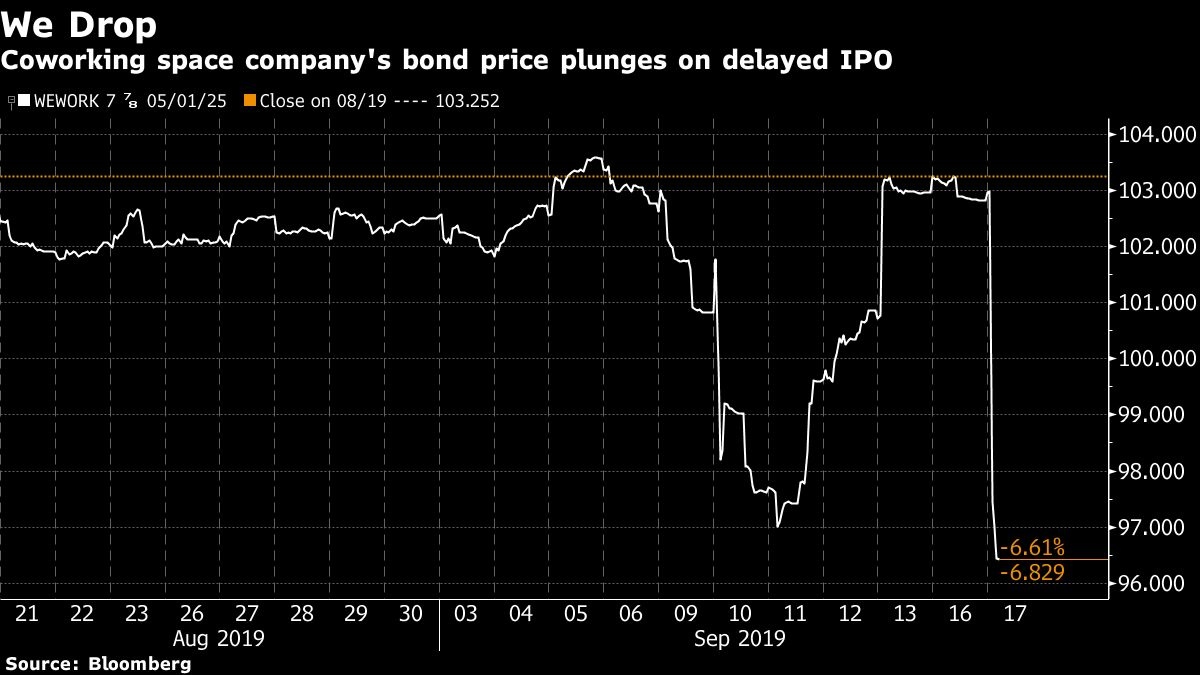 SoftBank had pressed WeWork to put off the stock offering amid doubts about the business, people familiar with the matter said previously. In January, SoftBank made its last investment in WeWork, renamed We Co., at a valuation of US$47 billion. The company was more recently expected to be valued at only about US$15 billion in a listing and perhaps even less, people familiar with the matter have said.

The company’s US$669 million of bonds due in 2025 dropped as much as 7.3 cents on the dollar to 95.5 cents Tuesday in New York, according to the Trace bond-price reporting system. That’s the biggest decline since the notes were issued in April 2018.

The biggest investors in SoftBank’s US$100 billion Vision Fund are now reconsidering how much to commit to its next investment vehicle after the oversized bet on WeWork soured. Saudi Arabia’s Public Investment Fund, which contributed $45 billion to the gargantuan fund, is now only planning to reinvest profits from that vehicle into its successor, according to people familiar with the talks.

Abu Dhabi’s Mubadala Investment Co., which invested US$15 billion in the Vision Fund, is considering paring its future commitment to below US$10 billion, the people said, asking not to be identified disclosing internal deliberations.

The delay also adds another sour note to a medley of high-profile but frequently disappointing IPOs this year. The offering was expected to have been the biggest after Uber Technologies Inc.’s US$8.1 billion listing, and ahead of the US$2.3 billion offering by Uber’s ride-hailing rival Lyft Inc. Both of those stocks are down more than 20 per cent, and software company Slack Technologies Inc. has fallen more than 30% from where it closed its first day of trading in June.

WeWork has become an extreme example of the excesses afforded to technology entrepreneurs in the era of unicorns -- startups valued at US$1 billion or more. Adam Neumann, WeWork’s co-founder and chief executive officer, was able to raise billions of dollars at astronomical valuations and spend freely, while retaining effective control over operations through special classes of stock.

In an effort to keep its IPO on track, WeWork last week took steps to limit Neumann’s control of the company after an IPO, as well as other measures to improve its corporate governance.