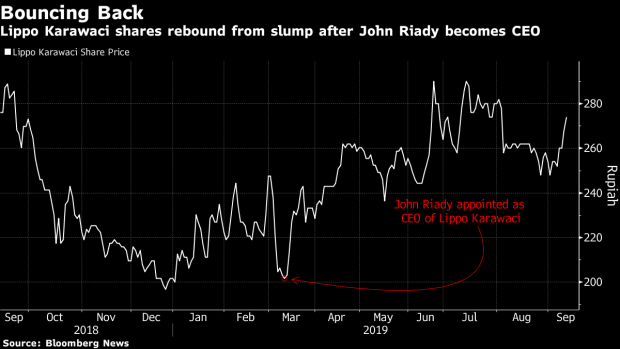 Late last year, when Indonesia’s biggest property developer was sinking under debt, it was crunch time for the Lippo Group’s Riady family.

At a meeting to discuss rescue options, tycoon Mochtar Riady, 90, the founder of the group, turned to his young grandson for help. Reluctant at first, John Riady -- a Wharton School graduate -- said he eventually agreed to run the troubled flagship PT Lippo Karawaci. His salvage plan included a $788 million rights issue in July, sale of assets and a debt recast.

The measures have helped ease a cash squeeze and put the money-losing, listed property unit on a path to recovery. The revamp will start returning positive cash flow starting next year, while the company will continue to dispose of non-core assets to pare debt, the junior Riady said in an interview. In a show of confidence, shares of the developer have surged 37% since he became the chief executive officer in March, while its dollar bonds have also rallied.

A family member stepping in “sends a message to the market that we are serious about it and we are committed to it,” Riady, 34, said in an interview Monday at a golf course developed by his company on the outskirts of Jakarta. “That you are not going to default, you are going to fix things.”

Having tided over the crisis that also threatened to drag down the wider, 68-year-old banking-to-media-to-hospitals empire, the Riady scion is already charting a new course for growth. The focus would be mainly on property development and health care -- legacy businesses that are “relatively protected from the digital revolution,” Riady said.

The tycoon wants Lippo to be among the largest real-estate companies in Southeast Asia within two decades, rivaling regional giants such as Philippines’s Ayala Land Inc. and Singapore’s CapitaLand Ltd.

Aiding those ambitions would be rising demand for homes in Indonesia, the world’s fourth-most populous nation. The country will need 12 million homes over the next decade as more Indonesians seek ownership, Riady said, adding Lippo would be at the forefront to tap that market.

“We are entering a 10-15 year golden window of opportunity where home ownership will rise,” he said. “You’re gonna see this boom.”

Indonesian President Joko Widodo’s recent efforts to make home purchases easier may also fuel demand. With growth in the $1 trillion economy facing the risk of slowing to a five-year low in 2020, the government and the central bank have been easing mortgage-loan rules to help stimulate demand.

While the future offers opportunities for the group, Riady will still need to ensure a steady cash flow to prevent a recurrence of the debt woes that has plagued his company.

Lippo Karawaci reported a loss of 1.46 trillion rupiah ($104 million) in the first half of 2019 after taking a one-time charge of 1.5 trillion rupiah as the company switched to a more conservative accounting standard, Riady said.

Its largely dollar-denominated debt has put pressure on the company’s cash flow as the rupiah weakened more than 6% against the greenback over the past two years. The timing couldn’t have been worse because the firm was embarking on a $18 billion Meikarta township project -- the group’s largest and most ambitious undertaking.

The company’s finances are comfortable enough to repay about $484 million of dollar-denominated debt coming due in the next three years, Riady said, adding the recast has helped reduce debt over equity to 29% from as much as 40% at the end of last year.

The action plan to revive Lippo Karawaci has made the firm’s high-yield dollar notes due 2022 and 2026 among the best performing corporate dollar bonds in Asia this year, according to data compiled by Bloomberg.

The executive is also inheriting some of the fallout from a bribery probe related to approvals for the Meikarta development. The inquiry, which required group Vice Chairman James Riady -- John’s father -- to answer investigators’ queries, almost derailed the project.

These challenges contributed to Riady’s initial hesitation to take up the top job, when his grandfather, uncle and father approached him. And, it is rare within the group for a family member to be named the chief executive officer of a listed company.

“I thought about it for one-two weeks,” he said. “But then took about three-four months to put together a transformation plan to make sure it was a plan that was fully funded and can succeed.”

Mochtar Riady started out his business at the age of 22 as he worked in a bicycle shop in East Java. He became a career banker in the 1960s and had helped build several Indonesian lenders including PT Bank Central Asia, which is now the Southeast Asia’s largest bank by market value. The wealth of the senior Riady, who has Chinese roots, was estimated at $2 billion last year by GlobeAsia, a publication owned by Lippo.

The group, which has half of its assets in Indonesia, is also open to any investment opportunities in China and other countries, according to John Riady.

Prior to his current job, Riady dedicated his time mostly as a managing partner at the venture capital arm of Lippo Group called Venturra Capital for technology startups. He tasted success there with the development of OVO, a digital payment platform, in which ride-hailing app Grab holds a stake.

The group’s other lines such as cinemas, malls and tech startups are “just investments” that the company is open to cashing out for better shareholder returns, he said.

“It’s a big role, so I don’t take it lightly,” Riady said. “You have a responsibility not only to the family but to the minority shareholders at large. That’s real.”

--With assistance from Denise Wee.

To contact the reporter on this story: Harry Suhartono in Jakarta at hsuhartono@bloomberg.net

To contact the editors responsible for this story: Sam Nagarajan at samnagarajan@bloomberg.net, Thomas Kutty Abraham