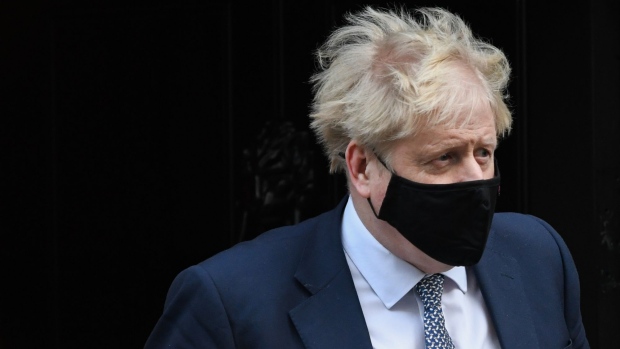 Boris Johnson, U.K. prime minister, speaks during a news conference at the COP26 climate talks in Glasgow, U.K., on Wednesday, Nov. 10, 2021. Climate negotiators at the COP26 summit were banking on the world’s most powerful leaders to give them a boost before they embark on two weeks of fraught discussions over who should do what to slow the rise in global temperatures. Photographer: Jonne Roriz/Bloomberg , Bloomberg

As Boris Johnson’s future as U.K. prime minister hangs in the balance, it’s worth considering what his potential exit means for one of the world’s most ambitious climate agendas.

It could signal a weakening of the U.K. government’s focus on cutting planet-warming emissions. Few, if any, of his potential successors have shown they want to speed up the transition to a greener economy.

Chancellor of the Exchequer Rishi Sunak — bookmakers’ favorite to succeed — last year tried to block spending on Johnson’s green measures. In his last major fiscal event in October, Sunak allocated too little investment to put the U.K. on track to reach its goal of net-zero emissions by 2050 and the independent Climate Change Committee has criticized his Treasury for failing to come up with an adequate plan to fund decarbonization.

READ MORE: How U.K. Tories Get Rid of Their Leaders

It’s unclear what stance Sunak will take on climate change if he comes to power. After all, the job of the chancellor is to balance the books and keep the government’s finances in check. And Sunak has also taken some progressive steps such as adding climate considerations to the Bank of England’s mandate and requiring companies to lay out in detail how they plan to cut emissions.

"Sunak's position on climate change is driven by the position of the prime minister rather than his own ideology,” said Shane Tomlinson, acting chief executive of the think tank E3G. “It could get worse but it could also get significantly better.”

A lot depends on which wing of the Conservative Party gets his ear. A small group of libertarian Members of Parliament led by Steve Baker want to delay progress on reaching net-zero. But there’s also a caucus of more than 100 MPs calling for the transition to go faster.

A key upcoming test will be how Sunak deals with the energy crisis, says Joss Garman, U.K. director of the European Climate Foundation. The government is under pressure to find a way to protect consumers as prices rise and temperatures drop this winter. What he chooses to do will show how committed he is to weaning the U.K. of its addiction to natural gas or boosting renewables. One option being considered is to cut green levies on energy bills that help pay for the transition.

Things look bleaker for climate policies if Liz Truss, the next most likely successor, is chosen to replace Johnson instead. The foreign secretary has aligned herself with net-zero skeptics and the U.S. Republican Party. In an interview last month with the Times of London, she labelled climate hawks such as Zac Goldsmith part of “the axis of evil”.

Some other contenders, such as Michael Gove, minister in charge of housing, and Jeremy Hunt, a moderate who was the runner-up in the last leadership contest, have shown more of a commitment to tackling climate change. But the odds aren't stacked in their favor to win the Conservative Party vote.

Still, Johnson himself entered government much more skeptical of climate action; his position changed drastically as voters demanded more measures to slow global warming and international consensus on the urgency of the crisis grew stronger. In recent months, he has tried to make the U.K. a global leader on the issue, setting the most aggressive emission-reduction targets among Group of 20 countries and pushing the rest of the world to “consign coal to history” at the COP26 climate change talks in Glasgow in November.

With Johnson gone, “there would be a huge concern that people might move away from the emphasis on net-zero and especially the opportunities, like jobs, that might come from watering this down,” said Alexander Stafford, one of Johnson’s newest Conservative MPs. Stafford is part of a cohort who entered Parliament for the first time in 2019 by taking seats that had previously been Labour strongholds. Many of them, like Stafford, were strongly in favor of Brexit and also demanded more action on climate change.

Ultimately, the strength of the new administration’s climate policies may come down to what voters want. The Conservative Party has a history of ruthlessly sacking leaders who won’t win them the next election. Public concern about climate change and pollution doubled to near record levels, according to a poll by Ipsos Mori in August. It came second only after Covid-19.

It’s a particular worry for so-called “red wall” MPs such as Stafford, whose constituents could benefit from investment in new green industries such as electric car manufacturing and offshore wind. On Wednesday, one such MP defected to the Labour party, the latest sign that Johnson’s grip on power is weakening.

“If you take a hard-headed view of what’s needed to win an election, then we can see that climate change will be central,” said Tomlinson.

Jess Shankleman writes the Climate Report newsletter about the impact of global warming.