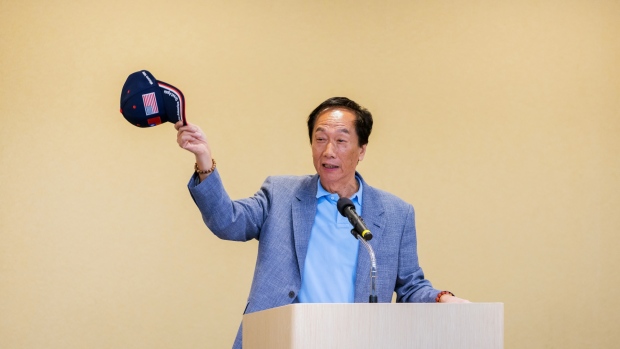 Buyers inspect pig carcasses hanging from a conveyor at a pork wholesale market on the outskirts of Shanghai, China, on Tuesday, May 28, 2019. The deadly pig virus that jumped from Africa to Europe is now ravaging China’s $128 billion pork industry and spreading to other Asian countries, an unprecedented disaster that has prompted Beijing to slaughter millions of pigs. Photographer: Qilai Shen/Bloomberg , Bloomberg

(Bloomberg) -- Trade and Hong Kong have dominated conversation in Beijing this summer, and rightly so. But coming up fast is pork.

That’s what happens when the price of China’s staple meat surges by almost 50% from a year earlier and members of the Politburo issues calls to increase output.

Prices have soared over the last few months thanks to African swine fever, the deadly hog disease that first spread to China more than a year ago. Since then, millions of pigs have died from the illness or been culled by authorities hoping to prevent its spread. The U.S. Department of Agriculture estimated in April that Chinese hog production would fall this year by 134 million head – equivalent to America’s entire annual output.

The impact on consumers is becoming more significant. A city in southern China began capping prices this month and limiting how much pork any individual can buy. And this week, a meme began to circulate online of a man wearing a slab of pork belly around his neck with text suggesting this was the newest way to show off one’s wealth in China.

Chinese officials, worried that runaway prices could fuel public anger, have jumped into action. The measures they’ve taken have ranged from releasing meat from government reserves to encouraging the import of pig sperm to bolster breeding. What they've not done is just as notable.

In July 2018, roughly when China discovered its first infection of African swine fever, Beijing also began imposing higher tariffs on American pork, taking total levies on U.S. shipments to 62%. Looking at that charge today, the question begging to be asked is who loses if those tariffs are cut.

There appeared to be an exchange of olive branches this week. First, China announced that a range of U.S. goods would be exempted from tariffs. And though that list didn’t include major agricultural items such as soybeans and pork, President Donald Trump took notice and then reciprocated by delaying the imposition of new American tariffs to Oct. 15 from the first of the month. Will there be more? A commentary in the Communist Party’s flagship People’s Daily newspaper, which called on Washington to create the right conditions for talks, would suggest Beijing is hoping so. The article even volunteered a way for Trump to do that: get Peter Navarro to stop talking.

The pain being inflicted by the trade war is becoming clearer around the world as top Chinese and American negotiators prepare for a new round of talks in Washington. At the Frankfurt auto show, executives expressed concern about gloomy consumers. In Wisconsin, factories are fretting about falling orders. And in China, statistics for August showed a surprise contraction in exports as shipments to the U.S. tumbled. Whether that pain makes a trade deal more likely remains uncertain.

The toll that protests in Hong Kong have had on local businesses is also becoming more apparent. Data released this week showed the number of tourists visiting the city plunged 40% from a year earlier in August. That’s the biggest decline since the SARS epidemic killed hundreds in 2003. The slide for Chinese visitors was even more pronounced, with the number of mainland tour groups falling 90% during the first 10 days of September. Even the property market is starting to show signs of pain. Sun Hung Kai, Hong Kong’s largest developer, began selling units at a 20% discount.

The question captivating Taiwan at the moment is if Terry Gou will run for president. The billionaire founder of Foxconn, the world’s biggest contract maker of iPhones and other electronics, campaigned this summer to be the opposition Kuomintang party’s candidate and lost. That’s why he’s mulling running as an independent. Already in the race are Han Kuo-yu, the mayor of Kaohsiung, who has advocated closer ties with China and who beat Guo for the Kuomintang nomination. Facing off against him is incumbent Tsai Ing-wen, whose more skeptical approach to Beijing has helped her gain in recent polls as the ongoing protests in Hong Kong fuel concerns in Taiwan. Adding Gou to that mix would make an already fascinating January election down right riveting.

And finally, a few other things that caught our eye:

To contact Bloomberg News staff for this story: John Liu in Beijing at jliu42@bloomberg.net

To contact the editor responsible for this story: Jeff Black at jblack25@bloomberg.net