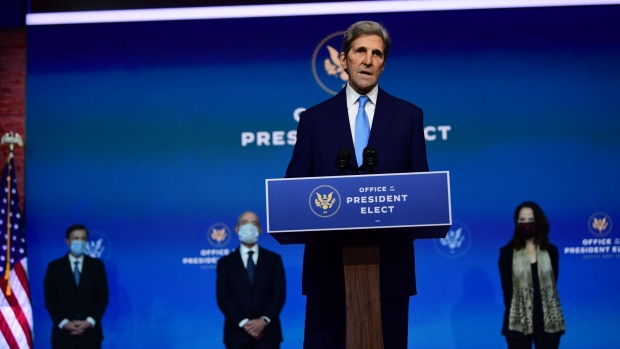 WILMINGTON, DE - NOVEMBER 24: Special Presidential Envoy for Climate John Kerry speaks after being introduced by President-elect Joe Biden as he introduces key foreign policy and national security nominees and appointments at the Queen Theatre on November 24, 2020 in Wilmington, Delaware. As President-elect Biden waits to receive official national security briefings, he is announcing the names of top members of his national security team to the public. Calls continue for President Trump to concede the election as the transition proceeds. (Photo by Mark Makela/Getty Images) , Photographer: Mark Makela/Getty Images North America

(Bloomberg Opinion) -- President-elect Joe Biden’s decision to create a new cabinet-level position for climate-related issues — and to choose so prominent a figure as former Secretary of State John Kerry to fill it — demonstrates Biden’s sincerity over putting climate at the very center of U.S. foreign policy. It is easy to understate the importance of this appointment, given the flurry of czars created by most new administrations.

However, if Kerry’s position works as intended, this could mark the beginning of a significant transformation of U.S. foreign policy. It won’t be easy: Such a shift goes against the grain of how foreign policy has traditionally been formulated and executed.

Taking climate more seriously means going far beyond simply rejoining the Paris accords and participating fully in other international forums related to climate. It means integrating climate policy into all aspects of foreign policy and marshaling many instruments of U.S. national power — economic, diplomatic and rhetorical — to coerce, compel and incentivize countries to address climate change.

Given the seriousness of the challenge, one can make a strong case that this shift is long overdue. Yet, placing decarbonization at the heart of U.S. foreign policy will have repercussions well beyond climate change, potentially altering the geopolitical landscape in fundamental ways.

Realistically, there is a finite number of issues the U.S. has the bandwidth and leverage to work in any bilateral or multilateral relationship, and a focus on climate will likely come at the expense of advancing more traditional national-security issues such as nonproliferation, counterterrorism and possibly human-rights advocacy.

This is not simply a question of walking and chewing gum at the same time. Tradeoffs are inherent in national security. Balancing foreign-policy priorities can involve fraught choices — an extreme example being how the U.S. turned a blind eye to Pakistan’s nuclear pursuits in order to secure its support in repelling the Soviet Union in Afghanistan in the 1980s. The Biden administration will face similar dilemmas as it elevates climate to the top of its global concerns.

One relationship where two of its high priorities will come into conflict is that with Saudi Arabia. Alongside climate, the Biden team promises to put a renewed emphasis on human rights and respect for democracy. Biden has pledged to hold a “Summit of Democracies” early in his presidency. On the campaign trail, Biden vowed to treat the Saudis like “the pariah that they are.”

However, a foreign policy that makes a top priority of climate would recognize the importance of working with potential spoilers such as the Saudis, and ensuring that they have a stake in a successful energy transition. The U.S. would need to invest itself in the success of Saudi Arabia’s Vision 2030 — the blueprint for diversifying the country’s economy away from oil — not undermine it.

As of now, most foreign-policy professionals are new to the idea that climate should be infused into their every interaction. Environmental issues have been seen more as “an issue-area expertise” than as an essential competency for every national-security expert. That will need to change.

Another challenge will be the link between how aggressively U.S. leaders can push the climate issue abroad in relation to the extent of progress made at home.

There is always a connection between domestic and international policy, but here it is particularly prominent. For instance, the world will be looking for the U.S. not only to rejoin the Paris Agreement, but to put forward a much more ambitious “national determined contribution” — the individual pledge made by each nation on greenhouse gas emissions. A credible one will require significant action at home, beyond even the measures such as the Barak Obama administration’s Clean Power Plan.

Likewise, a foreign policy on climate-turbo will need to involve intensive efforts to convince developing countries to abandon coal plants that are still economically viable. Yet doing so will be nearly impossible unless the U.S. can demonstrate similar measures within its own borders.

Quite apart from the execution of diplomacy, this drive to put climate at the heart of global interactions will also create challenges for policy formulation.

Many questions remain about how this new post will fit into the traditional bureaucracy. Two models — one formal and one informal — seem possible. The first is the position of the director of national intelligence, created at the recommendation of the 9/11 Commission to coordinate the more than a dozen intelligence agencies existing and overlapping within the U.S. government. Many who have worked inside them would agree that more coordination was necessary, but would also admit that this post took years to find its footing, and is less powerful than the technically subservient director of the CIA in some respects.

The second potential model is the Office of the Vice President under Dick Cheney. Cheney became arguably the most powerful vice president in history, not only by the force of his personality and longstanding relationships. He also expanded the traditionally skeletal staff of the vice president to a size that allowed his office to be omnipresent in the interagency process. In most every meeting convened by the National Security Council, Cheney’s staff played a prominent role, putting forward opinions and proposals that others knew to take seriously.

It is easy to see how parallels will be drawn, particularly if Kerry’s staff — likely to be of significant size — is placed in the White House.

The jobs of national security advisor and secretary of state will be altered — both positively and negatively — by the existence of a cabinet-level climate czar. The national security advisor will need to resolve heated debates over conflicting priorities. The secretary of state will need to coordinate closely with the climate team to ensure that foreign counterparts — most prominently the Chinese — are not able to pit parts of the U.S. government against itself. The people in these two posts, and those serving them, will spend significant time both harnessing and deflecting the power of Kerry and his team.

All this may give the impression that the climate czar is an unnecessary creation, bound to complicate the smooth workings of a foreign-policy team that needs to move quickly in a troubled and complex world.

The opposite seems more likely: That Biden created this position precisely because the bureaucratic hurdles and execution challenges of making climate change central to U.S. foreign policy will be so great. Moreover, Kerry is likely the appropriate pick for the job, given the stature and stamina that will be required to do it successfully.

Meghan L. O’Sullivan is a Bloomberg Opinion columnist. She is a professor of international affairs at Harvard’s Kennedy School, the North American chair of the Trilateral Commission, and a member of the board of directors of the Council on Foreign Relations and the board of Raytheon Technologies Corp. She served on the National Security Council from 2004 to 2007.