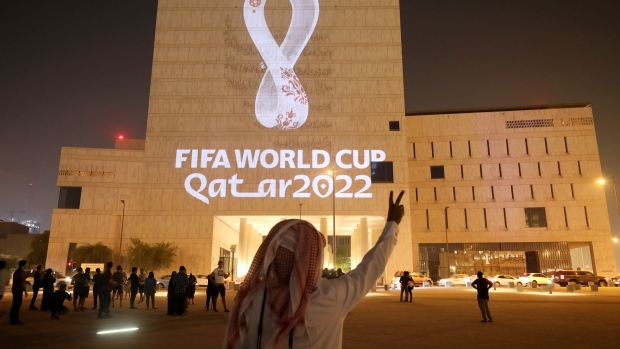 (Bloomberg) -- One thing is for certain as the countdown starts in earnest for the 2022 World Cup in Qatar. This year’s global soccer spectacle will be unlike any other.

For the first time in the quadrennial tournament’s 92-year history, it will be staged in November and December instead of the mid-year months. It will also be the biggest sporting event ever held in the Middle East -- and in a conservative, majority-Muslim country to boot. All that before factoring in Covid-19.

FIFA World Cup 2022 tickets. How much are they, and how can you buy them?

A seat for a group-stage match starts at 250 riyals ($68) for international visitors, but Qatari residents will get special discounts and can pay as little as 40 riyals. A prime seat for the Dec. 18 final will set you back 5,850 Qatari riyals.

The first stage of ticket sales runs from Jan. 19 to Feb. 8. Fans can apply for individual matches or a series of matches in various price categories. If applications exceed the tickets available for any game and category, applicants will be selected by a random draw. That will be followed by a first-come-first-served stage.

Once schedules are determined in April, there will be a similar two-part application process. Once that’s done, remaining tickets will be available in a last-minute sales phase and through a ticket-resale platform until the final.

Qatar is tiny. It’s smaller than Connecticut and most of its 2.7 million population lives in the capital, Doha, or its suburbs. None of the matches will be played more than 31 miles (50 kilometers) from the city, a fact touted by organizers as likely to make the tournament environmentally friendly and even allow fans to attend more than one match on any given day.

Most of Qatar’s attractions are located on the Persian Gulf coast, north along Doha’s “Corniche” seafront, through an artificial island called The Pearl, to a new urban development named Lusail. Outside the Doha metropolitan area, much of the country is desert -- characterized by rolling sand dunes in the south, and a flat, rocky landscape elsewhere.

Will Qatar stadiums be air-conditioned?

Qatar has refurbished one existing stadium and built seven new ones for the tournament, a $10 billion program that has attracted controversy for its treatment of construction workers.

All the stadiums will employ cooling technology or design, though not every one will be fully air-conditioned. That said, it will be relatively cool during the weeks of the tournament. Unlike the summer months, when temperatures can average 42 degrees Celsius (108 Fahrenheit) during daytime, the mid-November average high in Qatar is 29 Celsius (85 Fahrenheit). It’s cooler still in December.

Qatar hotels and accommodation. Where will people stay?

Local organizers have had to come up with some creative ways to accommodate the 1.2 million visitors expected to descend on Qatar over the course of the tournament, a number equivalent to almost half the country’s population. In addition to hotels and apartment rentals, authorities have chartered two cruise ships from MSC Cruises, which will provide a total of 3,898 cabins during the event. Organizers also say desert camping in designated villages will be made available for more adventurous fans, though they haven’t offered details.

Qatar is a Muslim country. Can you drink alcohol during the World Cup?

Qatar isn’t a dry country, but the government curtails alcohol sales. Liquor is served at select restaurants, typically those attached to hotels. A single depot run by Qatar Airways sells wine, beer and spirits (as well as pork) to foreign residents, provided they have permission from their employers. Organizers have yet to confirm whether alcohol will be on sale inside stadiums, but it will be available in designated fan zones.

Both men and women are expected to cover their knees and shoulders in public places. Malls, parks and official buildings routinely deny entry to people who flout the dress code. However, much looser standards apply in places that cater to white-collar expats, including many luxury hotels and The Pearl. Some women wear shorts and tank tops at such places, and bikinis around swimming pools won’t raise eyebrows.

Is Qatar safe for the World Cup?

Very safe. The country ranks 29th out of 163 countries on the World Peace Index, ahead of Spain, Italy and the U.K.

Qatar is nowhere near the conflict zones of Yemen, Syria and Iraq. It also maintains cordial ties with Iran, meaning it’s somewhat insulated from flare-ups with Tehran. Host to the largest American military base in the Middle East, the country has been increasing its cooperation with the U.S. on combating regional terrorism, including paying for a counterterrorism program to provide training ahead of the World Cup.

What about for women, the LGBTQ+ community and people of color?

Practically, women in Qatar have fewer freedoms than men, but female tourists aren’t likely to encounter much overt discrimination. Women are generally treated with respect in public places.

Organizers have preached openness to people of all sexual orientations ahead of the event, and have even said that they’ll allow rainbow flags to be flown in the stadiums. Still, same-sex conduct is criminalized under Qatari law and punishable by prison, though gay people within the expatriate community do date and live together discreetly. Other communities are less tolerant. Gay and lesbian Qataris have told human rights groups that they’re forced to hide their gender identities.

The United Nations Special Rapporteur on contemporary forms of racism, racial discrimination, xenophobia and related intolerance found that racial and ethnic stereotypes, particularly for people from sub-Saharan Africa and Southeast Asia, are prevalent in private and public life. She found that racial profiling extends to the criminal justice system, and received reports of people who were denied access to malls and parks based on their appearance. In practice, such discrimination is common for migrant workers, but may be less so for tourists.

How much of a party will the World Cup be?

One major talking point among residents is the degree to which local laws will be enforced during the World Cup. While there will be predictably low tolerance levels for hooliganism, other types of behavior considered acceptable elsewhere might be frowned on and dealt with more harshly in Qatar than in other countries. For example, public displays of affection -- even between heterosexual couples -- are taboo in Qatar.

A key organizer said last year the government is exploring options on how to manage violations of modesty and decorum, like public drunkenness and indecency. It remains to be seen whether authorities will relax their approach in order to avoid international criticism.