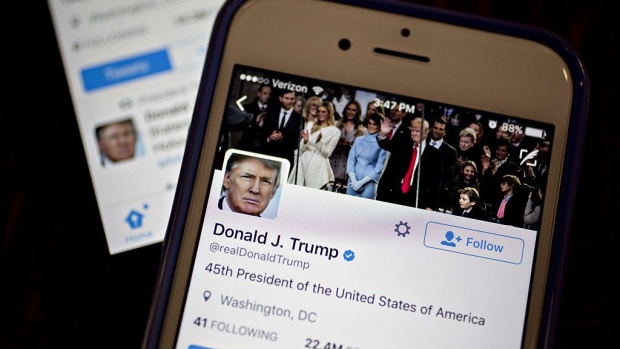 The Twitter Inc. accounts of U.S. President Donald Trump, @POTUS and @realDoanldTrump, are seen on an Apple Inc. iPhone arranged for a photograph in Washington, D.C., U.S., on Friday, Jan. 27, 2017. Mexican President Enrique Pena Nieto canceled a visit to the White House planned for next week after Trump on Thursday reinforced his demand, via Twitter, that Mexico pay for a barrier along the U.S. southern border to stem illegal immigration. , Photographer: Bloomberg/Bloomberg

There’s no question about it -- global stock markets are roiled when Donald Trump tweets about the U.S.-China trade negotiations. Here’s one way to hedge against all that volatility: Buy Canadian stocks.

Just like that, clients get exposure to a developed US$2 trillion market with a stable government and one more thing: a gold and silver haven. Miners have about an 11 per cent weighting on the S&P/TSX Composite Index, while similar stocks on the U.S. benchmark have a mere 2.7 per cent weight.

That’s helpful on days like today, when Trump signals he could wait for another year before striking a trade agreement with China, sending investors fleeing risk assets and piling into havens. While the S&P 500 Index fell as much as 1.4 per cent Tuesday, the TSX slipped by only half that amount.

This is a regular occurrence for Canada stock traders, which might explain why locals are so heavily invested in their home country. Seventy-two percent of the time when Trump tweets about “China,” or “tariffs” or “trade” and stocks slump, the TSX outperforms U.S. stocks, according to data compiled by Bloomberg going back to the start of 2017.

In May, after Trump declared that the 10 per cent tariffs on Chinese goods would rise to 25 per cent, the S&P 500 plunged as much as 1.6 per cent, while the TSX dropped 1 per cent. When he said “China broke the deal,” the American benchmark fell 1.5 per cent and its Canadian counterpart slipped 0.8 per cent.

To be sure, on days where there’s positive trade news, the rally in U.S. equities tops that in Canada. And the market up north is generally less volatile than its southern neighbor.

While that’s partly due to the contribution of mining stocks, it’s also because banks, which make up a third of the TSX, are a bellwether of the nation’s economy and pay out dividends at ratios that are hard to find elsewhere. Utilities and REITs have also helped protect Canada’s key stock gauge from major plunges.