Europe, an early laggard in the developed world’s vaccination drive, has picked up the pace in recent weeks. That’s feeding through to travel behavior, with more people on the move during what is typically the peak vacation period.

From Germany to Spain to the U.K., freer borders and looser quarantine requirements are helping fill up planes again. The region has been on a winning streak since late April, when capacity was only a third of pre-pandemic levels. Airlines in Europe are now operating at 66 per cent of 2019 capacity, according to Bloomberg’s weekly flight tracker, which uses data from aviation specialist OAG to monitor the pulse of the comeback.

But the surge in demand has also laid bare the strains on an industry that was forced to make deep cuts to get through the crisis. It’s an issue particularly bedeviling U.S. carriers, where temporary and permanent job losses exceeded 150,000 at the nation’s four largest airlines last year, alongside mass grounding of planes to preserve cash. Now the companies are finding out that bringing back those workers and aircraft is a complex undertaking, putting pressure on their operations. 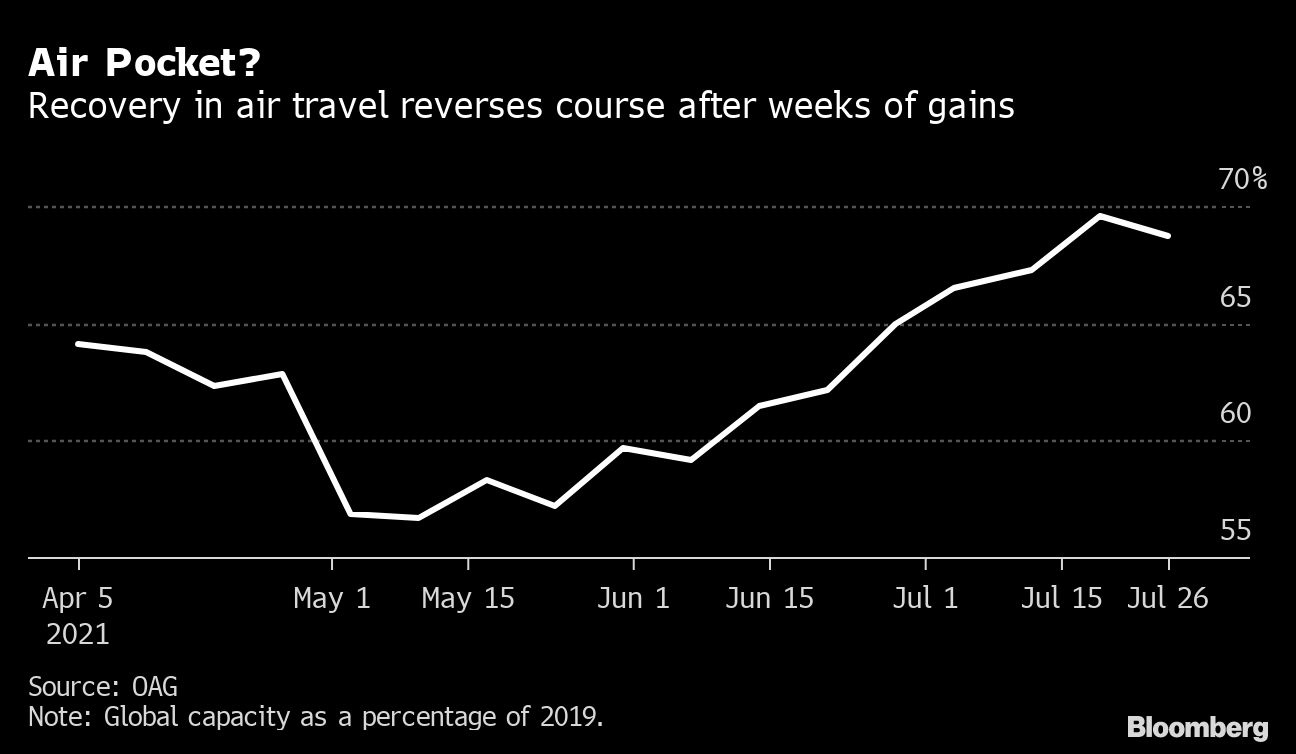 It’s a confluence of the struggles to manage the U.S. comeback, coupled with fresh outbreaks in parts of Asia. Vaccination rates remain below 20 per cent in countries from Indonesia to Thailand, where the more infectious delta variant continues to spread. Global capacity stands at 69 per cent of 2019 levels, after dropping almost 1 percentage point from last week, OAG data show.

“The global recovery was always going to be patchy,’’ said Sash Tusa, a partner at aerospace specialist Agency Partners in London. “Even while the two biggest domestic markets -- the U.S. and China — have been incredibly strong, the rest of the world has been going in and out of lockdowns.’’

Without international long-haul travel opening up in a meaningful way, global aviation will probably stay around these levels, “with a fair number of bumps,” Tusa said. 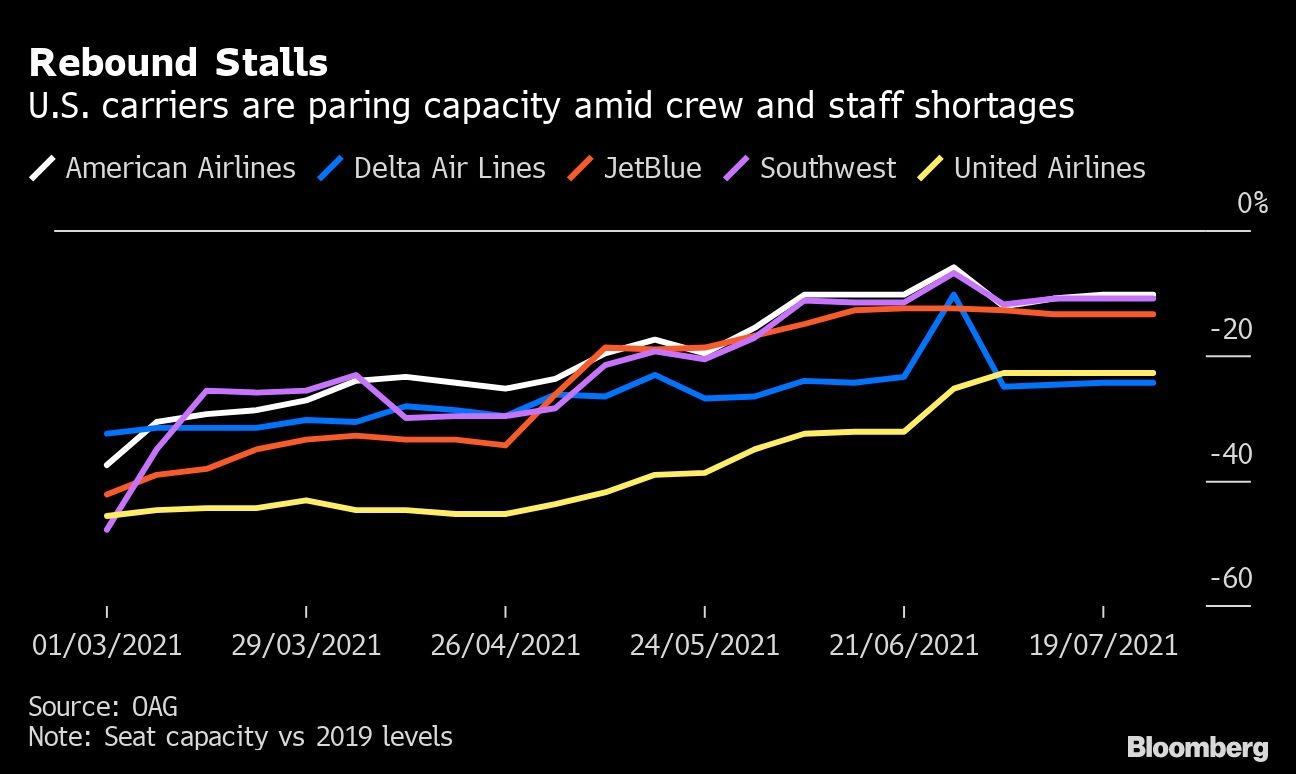 In the U.S., the world’s biggest aviation market, domestic travel is making a robust comeback at a rate that’s caught some carriers off guard. After implementing deep cuts at the height of the pandemic, airlines are now struggling to redeploy capacity. That’s led to a rapid recruitment drive for crews and pilots, including incentives to employees willing to work more shifts.

American Airlines Group Inc. will now hire 350 pilots this year and 1,000 next, 50 per cent more than its previous plan announced in April. Southwest Airlines Co. extended an offer of double-time pay to employees including flight attendants and airport ground workers who pick up extra shifts. 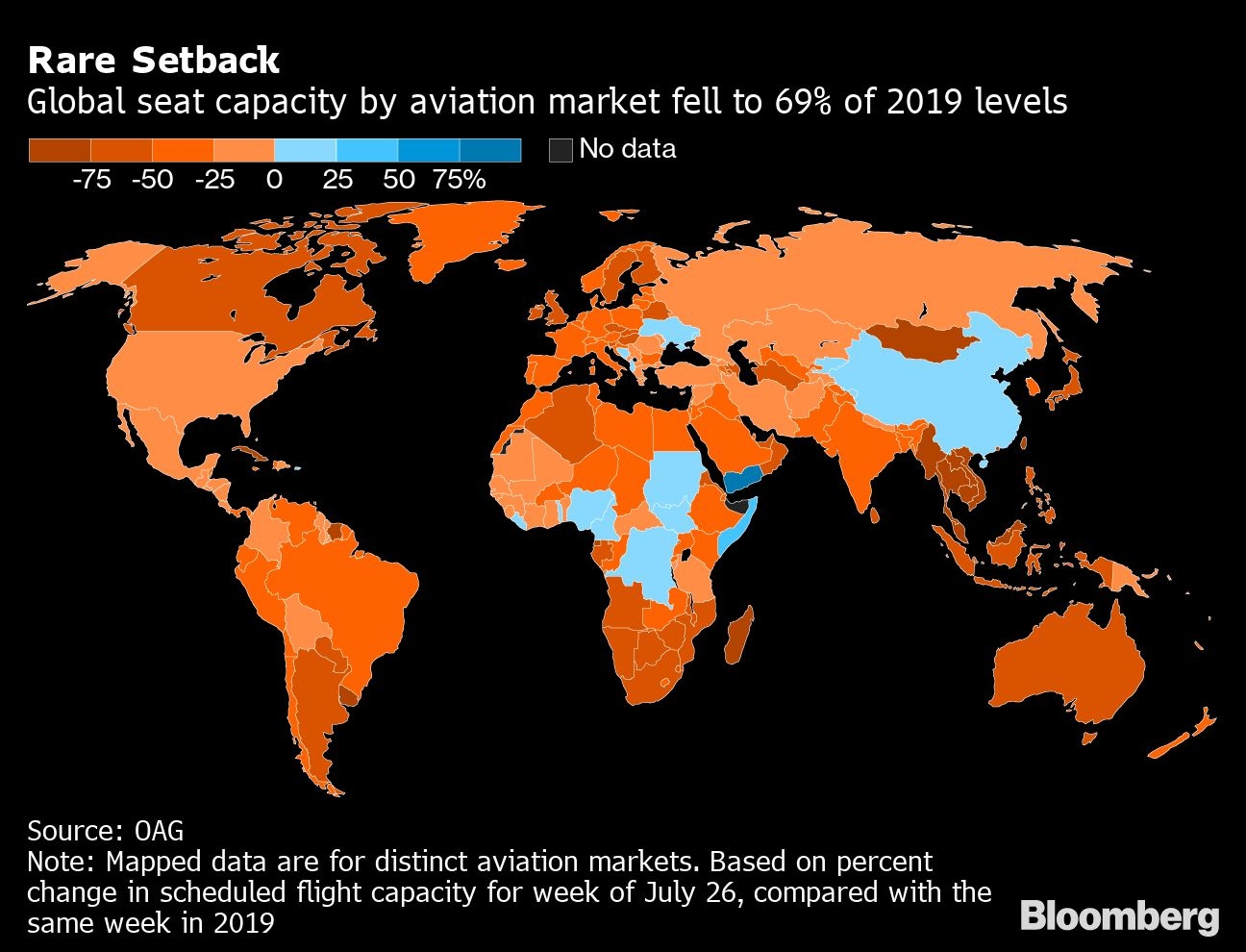 Southwest was the hardest hit, with 40 per cent of its flights delayed, and 3,060 outright cancelations in June, according to data tracker FlightAware. American, where 31 per cent of flights were delayed in June, pulled 950 trips from its schedule in the first half of July to get operations under control. It said the capacity it added in just a few months was equal to the size of its old merger partner, US Airways.

Delta Air Lines Inc. is hiring more than 5,000 people across the business, including 3,000 at airports in areas such as customer service,  catering and cleaning.

In the U.K., the government is poised to allow fully vaccinated visitors from the U.S. and the European Union to travel to England without needing to quarantine on arrival, a major boost for Heathrow airport and airlines that rely heavily on trans-Atlantic travel.

“We know there’s pent up demand to travel and our surge in bookings for U.S.-U.K. travel reflect this,” said Juha Jarvinen, chief commercial officer at Virgin Atlantic Airways Ltd. He said flight bookings have more than doubled week on week, with demand between New York and London increasing by almost 250 per cent.

The change may have come too late for British Airways to benefit before summer ends. On Friday, BA parent IAG SA predicted it will fly at just 45 per cent of 2019 capacity during the third quarter, even as French rival Air France-KLM expands its schedule and targets a quarterly profit.

Ryanair Holdings Plc has also seen a marked upturn in bookings, while EasyJet Plc is pumping more capacity into routes on the continent to capture stronger demand there.

Hungarian budget specialist Wizz Air Holdings Plc said it is operating 90 per cent of 2019 seating this month and expects to reach 100 per cent in August. Planes are flying for 10 hours a day, not far off from where they were before the pandemic, and the carrier said it’s adding 600 crew members. 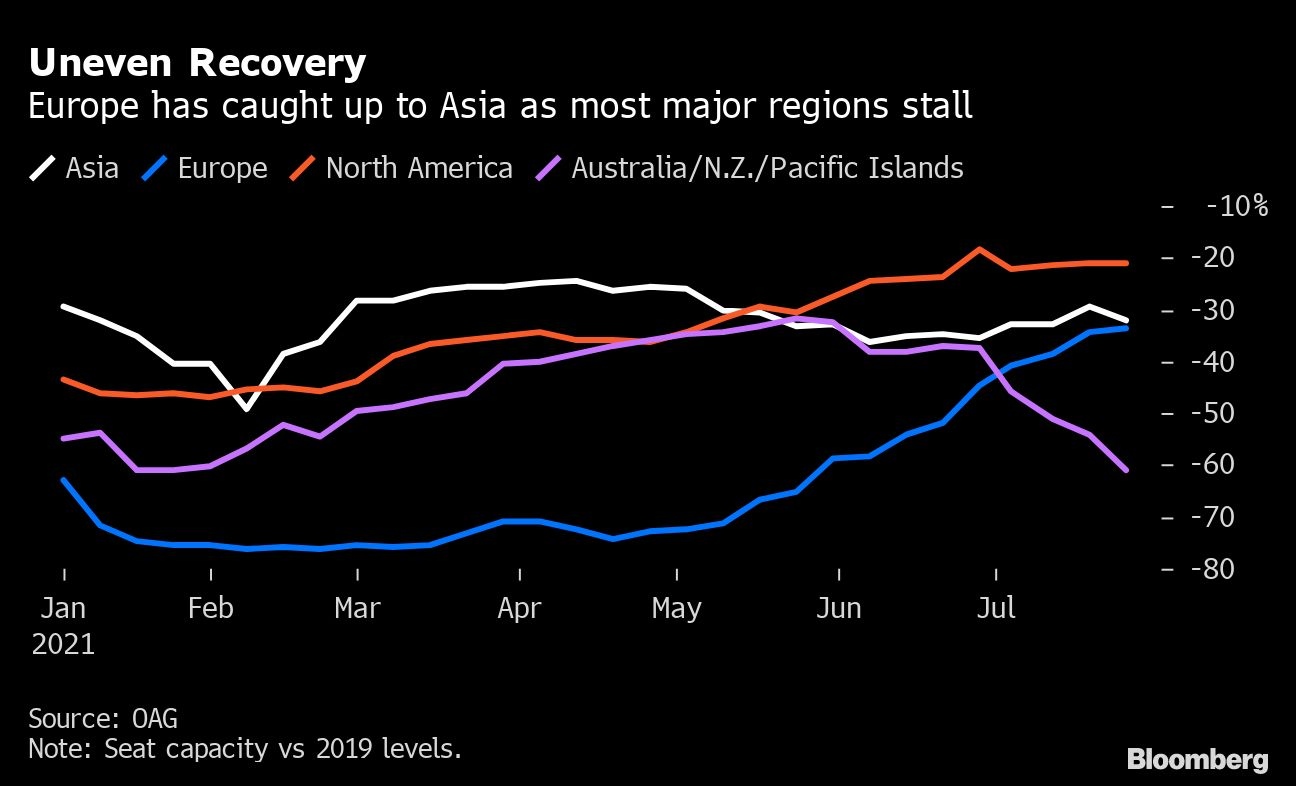 Aeroports de Paris, which operates dozens of airports including in the French capital, is seeing flight-scheduling plans that are set weeks in advance become more reliable. The coronavirus had created such uncertainty about border restrictions that the forecasts were often rendered useless.

“In the past two or three weeks, we’ve been able to trust their predictions,”  Chief Executive Officer Augustin de Romanet said. “They are more solid.”

China is seeing a flareup in cases after keeping the virus contained for months and enjoying a recovery in domestic travel.  The picture is bleaker in other parts of the region. Cases have surged in Southeast Asia due to the fast-spreading delta variant and slow rollout of vaccines, with an overall inoculation rate of only 11 per cent.

Indonesia has become a virus epicenter, and Vietnam has warned it may take months to contain an outbreak in Ho Chi Minh City and surrounding provinces, with local media reporting that several airlines have suspended all commercial passenger flights. Infections are also surging in Thailand, putting a plan for quarantine-free travel to the tourism hotspot of Phuket in doubt.

Further south, Australia is battling an outbreak in New South Wales and has implemented strict stay-at-home orders in Sydney. Throughout the Asia Pacific region, airlines carried only 1.4 million international passengers in June, just 4.4 per cent of the same month in 2019, the Association of Asia Pacific Airlines said Thursday.

"The already dire situation has recently been compounded by new COVID-19 infections across the region due to the delta variant, with ongoing border restrictions holding back any meaningful restart in international travel markets," said Subhas Menon, the group's director general.