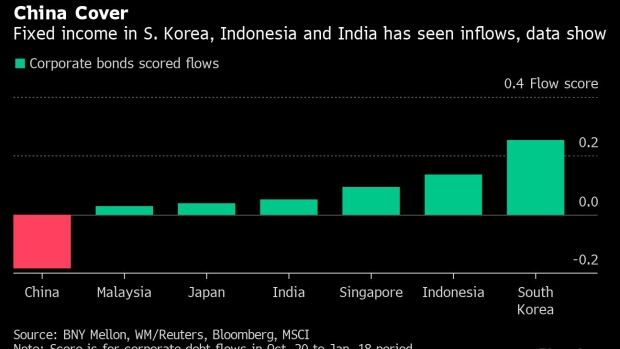 People look out at the city skyline from Mount Namsan in Seoul, South Korea, on Friday, April 24, 2020. South Korea reported six more coronavirus cases for the past 24 hours on Friday. New cases have slowed from a daily peak of more than 900 in late February. , Bloomberg

(Bloomberg) -- Investors have been taking refuge from the Chinese real estate debt crisis in pockets of the broader Asian credit market, and cite India among opportunities that are relatively insulated from the historic turmoil.

Rising inflation means there have still been losses for broader Asian bonds-- as there have been in many parts of credit markets globally -- but they’ve been much milder. Dollar notes of all ratings from Chinese issuers have lost about 3.7% in 2022 even after a rally in recent days for property developer securities sparked by policy support.

That compares with just 1.5% for Indian borrowers, 0.8% for South Korean firms and 0.7% for Philippine credits, according to a Bloomberg index.

“Investors have been hiding in Indian investment-grade and high-yield credit, and other parts of Asia outside of China, as a means to reduce their exposure to China property,” said Wai Mei Leong, a portfolio manager at Eastspring Investments.

One recent example of a money manager to have cut exposure to Chinese bonds is BDO Capital & Investment Corp., which sold its holdings of such securities, President Eduardo Francisco said last week.

Both Goldman and CreditSights consider Indian companies attractive. The U.S. bank recommends high-yield renewables, while the latter considers financial firms to be best shielded from the troubles in the world’s second-largest economy.

Still, there are plenty of risks for the broader Asian credit market. Because of demand from investors seeking to diversify, CreditSights said valuations for Asian credit outside of China have already been driven tighter. That means many South and Southeast Asian names warrant only a market perform rating, despite good fundamentals, it said.

Having taken a beating last year and for the first couple weeks of 2022, Chinese property dollar bonds have rallied in recent sessions thanks to a string of policy steps to ease restrictions on the real estate industry and broader monetary stimulus. But the outlook is highly uncertain, with more defaults expected, according to Goldman.

If the failures don’t get out of control, that may sustain interest in other pockets of the Asian market, but any prolonged crisis would cause an economic slowdown that would have ripple effects across Asia. Chinese debt constitutes an outsized share in regional indexes. Investors could decide to pull out entirely.

Facing requests for redemptions, bond fund managers “have to sell a bit of everything,” said Jean-Louis Nakamura, chief investment officer for Lombard Odier in Asia Pacific. “I’m afraid that this kind of indirect weakening of the Asia credit market will continue for some time.”

But for now the Asian credits outside China are offering lower volatility and some country-specific shifts have encouraged investors.

When it comes to tapping global financial markets, India trails economies like Brazil and South Africa, not least because the country’s central bank has historically been wary of hot money inflows. Yet the past few weeks have seen a surge of dollar-denominated issuance, with Reliance Industries raising $4 billion earlier this year in India’s biggest-ever foreign currency bond deal.

There’s also been an increase in green- and sustainability-bond sales, bringing it more in line with the trend elsewhere.

“We quite like the India space because there is a lot of ESG bond supply coming from those companies and they aren’t quite expensive compared with other Asian peers,” said Paula Chan, a senior portfolio manager at Manulife Investment Management (Hong Kong) Ltd. “Supply from there also offers quite a good diversification.”