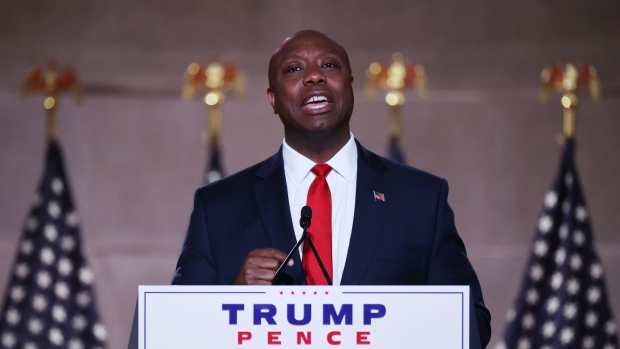 Homes stand in a neighborhood in this aerial photograph taken over Chicago, Illinois, U.S., on Wednesday, Jan. 8, 2020. The area is part of an opportunity zone. Once heralded as a novel way to help distressed parts of the U.S., opportunity zones are now being slammed as a government boondoggle. , Photographer: Daniel Acker/Bloomberg

(Bloomberg) -- Hours before the Republican National Convention kicked off this week, the White House had good news: Investors had plowed $75 billion into funds that target opportunity zones, showing the Trump administration’s signature tax break to help poor communities is working.The estimated haul means the program is on track to lift 1 million people out of poverty, according to the assessment released by the White House Council of Economic Advisers on Monday.

“It’s a made-up number,” said Brett Theodos, a senior researcher at the Urban Institute, of the fundraising tally. “It’s an estimate. It’s not actual data.”

Opportunity zones have been popular with investors, with some funds gathering hundreds of millions of dollars or more. Yet the impact on communities has been tough to gauge because the government has required little public reporting.

In the absence of data, supporters of the incentives say they have catalyzed investments in places such as Erie, Pennsylvania, that could really use it. But there are also examples of the perks juicing potential profits on luxury developments from Florida to Oregon. Several reports have shown how politically connected investors influenced the selection of zones to benefit themselves. That’s added to concerns that the tax break is a boondoggle.

Even so, President Donald Trump and his surrogates have been highlighting opportunity zones to bolster his bid for a second term. Senator Tim Scott, a South Carolina Republican who gave the closing speech at the convention on Monday and was one of the chief authors of the tax incentives, touted the $75 billion figure in his speech.

But a close read of the White House report shows it relies on significant assumptions. The authors started by getting the number of opportunity zone funds that the Treasury Department estimated were created in 2018. They then extrapolated the amount raised by using a sample of Securities and Exchange Commission filings and a self-reported survey from accounting and consulting firm Novogradac.

That approach confounded Samantha Jacoby, a senior tax law analyst at the Center on Budget and Policy Priorities, who’s called for more public information on opportunity zones. “It just doesn’t tell us much,” she said of the report. “They’re doing more work than they have to do by not asking for the information directly.”

Council of Economic Advisers Chief of Staff Rachael Slobodien said that the report was based on all the tax information that the Treasury was able to provide. The department is still doing “quality-control checks” on 2018 data on capital raised by funds. Information from 2019 filings wasn’t yet available, and the estimation technique that CEA used was based on several independent sources, she wrote in an e-mail.

“To call several pages of empirical methodology ‘guess-work’ or a ‘made-up number’ is inaccurate and baseless,” she said.

Democratic presidential candidate Joe Biden has said he would require more transparency to gauge the impact of opportunity zone investments. The perk was part of the 2017 federal tax overhaul, creating incentives to invest in more than 8,700 designated census tracts nominated by governors. Investors who fund projects in zones and meet certain requirements can defer capital-gains taxes on profits earned elsewhere and eliminate them on the new investments.

Raising money is not the same as deploying it, said Theodos, whose own research on opportunity zones has shown they’re falling short of their promise. In some cases, it will take years to invest the money raised and some of it may never be deployed at all.

He’s also suspicious of the report’s estimates for poverty alleviation, because they assume opportunity zones will have a similar impact as an earlier effort to lift up poor communities called the New Markets Tax Credit.

Slobodien said the comparison is valid, because both incentives are place-based and have similar requirements for which census tracts are eligible. The report detailed differences between the programs that could impact the estimate, which the authors described as “arguably conservative.”

But the differences between the programs could have a significant impact on what kind of projects get funded, said Theodos. New Markets requires community development entities to apply to the Treasury. They are selected on criteria like the effect a project will have on jobs. Opportunity zone funds self-certify, which means they can pursue projects that may have little or no community benefit.

“It’s a big leap of faith” that this program will lift a million people out of poverty, he said. “I don’t think that would pass muster in any journal.”