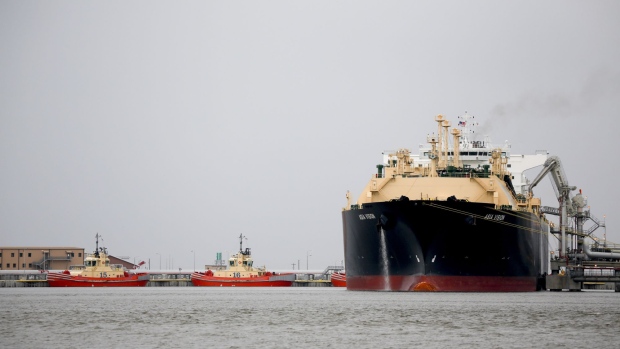 (Bloomberg) -- White House officials have asked the US Energy Department to analyze the possible impacts of a ban on exports of gasoline, diesel and other refined petroleum products, an indication that the controversial idea is gaining traction in some parts of the Biden administration.

The request follows a tense meeting between top administration officials and oil industry executives and comes amid growing concern that high gasoline prices pose a political threat to Democrats in the November elections, according to people familiar with the discussions. The Energy Department is providing insights on the economics at play and evaluating all tools on the table, but not in response to a formal or informal request for a study, said a another person familiar with administration conversations on the matter. Both people asked not to be identified discussing private deliberations.

An export ban would mark the most radical step yet by the Biden administration to tackle gasoline prices that surged over the summer and have risen again recently, just four weeks before midterm elections that will decide whether Democrats maintain control of the House and Senate. Oil producers and energy analysts have criticized the idea, saying it could backfire by ultimately raising costs even more for US consumers, while disrupting markets and cutting off European allies in their time of need.

The move underscores increasing consideration within the Biden administration of potential export limits. Government officials had raised the prospect of curbing exports in Friday’s meeting with executives from some of the nation’s largest oil companies. The discussions come just four weeks before midterm elections that will decide whether Democrats maintain control of the House and Senate.

Administration officials have grown increasingly frustrated with what they see as a lack of action by industry in response to repeated warnings about low fuel inventories. Energy Department officials have been meeting with leaders from the West Coast, East Coast and Midwest to examine regional concerns. A session last week with West Coast officials focused on high gasoline prices, declining inventories and refinery outages, one of the people said.

Recent polling shows gasoline prices, which remain stubbornly high in western states such as California, are a drag on Democratic candidates. Biden administration officials also have been concerned about low fuel inventories in the Northeast US.

“Banning or limiting the export of refined products would likely decrease inventory levels, reduce domestic refining capacity, put upward pressure on consumer fuel prices and alienate US allies during a time of war,” the trade groups said in the letter.

The risk is particularly acute in the import-reliant East Coast. Limits on pipeline capacity and US-flagged tankers capable of carrying gasoline and diesel from the Gulf Coast to New England mean the area depends on imported fuels, the groups said. And with fewer US fuels on the world market, the price of those imports could increase too.

“There simply is not sufficient pipeline connectivity or the range of economic shipping alternatives that would be required to transport significantly more fuel to the East Coast from refineries in the Gulf,” the letter said. “Banning exports of fuel from the United States will not eliminate this challenge or make it easier and more affordable to supply American-refined fuel to the East Coast. Instead, by cutting into global fuel supplies, it would likely raise the cost of fuel imported into the East Coast from the global market.”

As recently as Sept. 23, Granholm said restrictions were not being considered at the time.