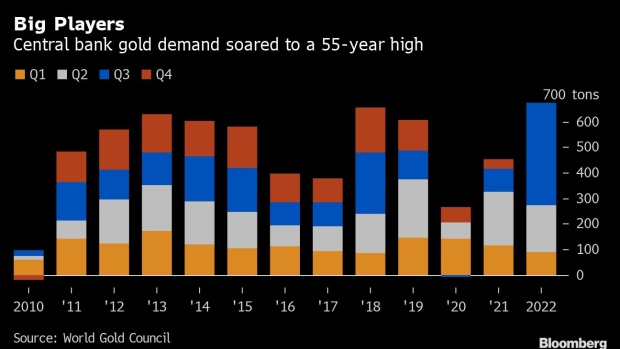 Unmarked gold bars at a gold and silver refinery operated by MMTC-PAMP India Pvt. Ltd., in Nuh, India, on Wednesday, Aug. 31, 2022. Gold held near its highest level in September 2022, as the dollar continued its retreat amid growing expectations that inflation may have peaked in the US. Photographer: Anindito Mukherjee/Bloomberg , Bloomberg

(Bloomberg) -- Central banks bought a record amount of gold last quarter as they diversified foreign-currency reserves, with a large chunk of the purchases coming from as-yet unknown buyers.

Almost 400 tons were scooped up by central banks in the third quarter, more than quadruple the amount a year earlier, according to the World Gold Council. That takes the total so far this year to the highest since 1967, when the dollar was still backed by the metal.

Bullion prices have been pressured this year by aggressive US interest-rate hikes as the Federal Reserve tackles soaring inflation, which have prompted exchange-traded fund investors to sell the non-yielding asset. But support has come from other areas, such as retail buyers in Asia and central banks.

Central banks including Turkey and Qatar were among recent buyers, as well as unreported purchases from institutions -- which the WGC said that although isn’t uncommon, amounted to a “substantial” estimate. Not all countries report their gold purchases regularly, including major ones like China and Russia.

“Not all official institutions publicly report their gold holdings, or may do so with a lag,” the WGC said in a quarterly report released Tuesday. “We can’t rule out further unreported buying.”

Despite the strong demand, bullion prices are mostly reliant on external factors such as macroeconomic sentiment and the direction of the dollar, said Gnanasekar Thiagarajan, director at Commtrendz Risk Management Services. The precious metal has been under pressure ahead of the Federal Reserve’s statement on Wednesday, he added.

--With assistance from Sing Yee Ong.