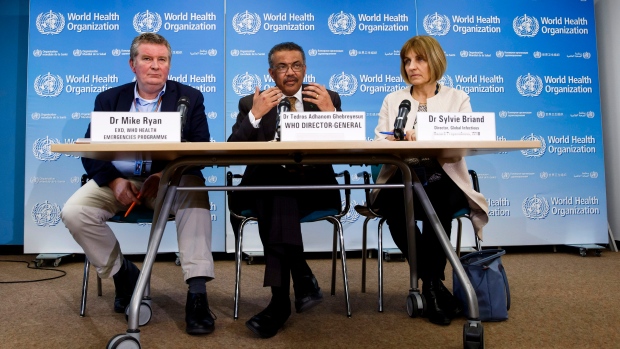 Tedros Adhanom Ghebreyesus, Director General of the World Health Organization (WHO), center, is flanked by Michael Ryan, left, Executive Director of WHO's Health Emergencies program, left, and Sylvie Briand, right, Director of Global Infectious Hazard Preparedness of WHO, during a press conference at the World Health Organization headquarters in Geneva, Switzerland, Wednesday, February 5, 2020. WHO Director-General Tedros Adhanom Ghebreyesus urged countries outside China to share more data on infections, saying detailed information has been provided in only 38% of cases. , Salvatore Di Nolfi/Keystone via AP

The head of the World Health Organization appealed for a stronger attack against the coronavirus on a webcast with world leaders, trying to rally support while U.S. President Donald Trump and others question the need for the extreme steps the agency has championed.

Shutdowns will slow the pandemic, but they won’t extinguish it, so countries also need to adopt aggressive measures to eradicate the virus, WHO Director-General Tedros Adhanom Ghebreyesus said on a private video-conference Thursday. He urged nations to remove export bans on medical equipment and ensure fair distribution.

Tedros told the leaders on the call, including Trump and U.K. Prime Minister Boris Johnson, to “fight like hell” and said the new coronavirus could “tear us apart if we let it.” He said millions of people could die without stronger action, and that the leaders’ own lives depended on it.

Tedros’s latest plea came just hours before Trump announced his plan on how to lift shutdowns gradually in areas with few cases. On Wednesday, the WHO chief had given world leaders a rare rebuke, saying governments should have acted one or two months ago and have wasted too much time. The U.S. now has more cases than China.

Countries have an obligation to test every suspected case, isolate infected patients and trace all of their contacts, the WHO chief said Thursday. He also said that the global shortage of personal protective equipment is putting front-line responders in danger, which puts everyone in danger.

Countries including Germany, Indonesia and South Korea have limited exports of protective gear such as medical masks. India has banned exports of chloroquine, a malaria treatment that’s being tested as a possible treatment and was touted prematurely by Trump.

The world should also do whatever is necessary to prevent a pandemic like this from happening again, Tedros said. WHO officials warned Thursday that if the virus is stamped out in one region yet spreads to another, it will come back.

“We’re all in this together, and we will only get out of it together,” Tedros said.